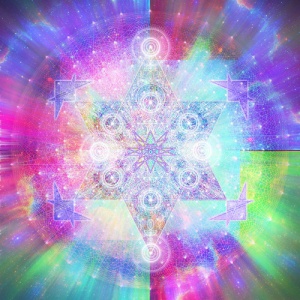 This effort is made in preparation for yet another new level of color frequency spectrums being projected as radiant light holograms into the planetary core manifestation architecture. A Krystal Kaleidoscope of plasmic light mirrored architecture is emerging into physical quantifications of color that project entirely new spectrums of light, frequency and time code. (What this means is that the particle wave manifestation of new color spectrums on planet is being observed, as well as the source code of its emanation generating from the Krystal Kaleidoscope from the Aurora time continuum.)

These reflective bands of coded plasmic light are being woven into sequential circuits into certain geographic areas of the planet. One purpose is to build multiple access points in our earth timelines that may potentially resonate in "reflectional symmetry" with the upcoming convergence happening in the Trans-time continuum. The Krystal Kaleidoscope is being described as such because this architecture operates similarly as to what we can understand from our human perspective as when looking into a kaleidoscope. A Kaleidoscope operates on the principle of multiple reflections, where several mirrors are placed at an angle of degree to one another. Typically there are three rectangular mirrors set at 60° to each other so that they form an equilateral triangle. The 60° angle creates several duplicate images of the objects, five at 60°, and 2 at 90°. As the tube is rotated, the tumbling of the colored objects presents varying colors and configurations in a beautiful symmetrical pattern created by the reflections.

The Krystal Kaleidoscope functions in the same way as the more recent architecture that has been placed on planet since the end of 2012, the Krystal Cathedral, Krystal Star Spires, and the City Four Square operate in mirrored reflection symmetry. What this means is that a figure which does not change its core energetic form, and is capable to hold integrity within itself, upon undergoing a reflection with the Krystal Kaleidoscope, has mirrored reflectional symmetry. Additionally, the mirrored reflection symmetry adjusts any rotational axis of symmetry into the core DNA template of the being. This means if the "reflectional symmetry" exists, that part of the reflection will expand its symmetry pattern throughout its entire DNA unwinding in any existing timelines in the holographic dimensions. This is reclamation of all Krystal Identities on earth to be returned for rehabilitation to the Aurora Founder Dimensions in the Trans-time continuum. This does not mean we drop the body. What it means is we are connected to the Founder's Krystal Consciousness identities in the Trans-time continuum in order to make the load out of earth humans to the Aurora time continuum in the future.

This is the GSF Ascension timeline hosted by Krystal Star.What this also means is that if there is no mirrored symmetry present in the reflection of that figure or form to Aurora colors, they will not perceive the Krystal Kaleidoscope design, source field of actual identity or any of its creations. This means it is essentially invisible to them because it simply does not exist in their lower dimensional perception of reality. This will eventually present the choice between eviction with the Vandal-Fallen NAA groups, annihilation of their species memory or genetic rehabilitation monitored under Krystal Star host on another globe chain.

To be permeated with the Omniversal Primary Ray Colors of our Founder's original blueprint being holographically projected from the Krystal Kaleidoscope in the Aurora time continuum is to say that many of us are undergoing a massive color correction to all of our Ray bodies. Also, the Ray attributes and aspects of color waves that have resulted from previous distortions in our manifested creations throughout timelines are in a process of color correction.Color correction and frequency saturation changes cellular memories and shifts timelines because it simultaneously shifts causal events that led into distortions or genetic damage made to our consciousness bodies.[1]

The Master Christos Collective are Ascended Masters of Krystal Star that may be communicated with in the Seven Higher Heavens or in the Trans-time continuum, which is located in the core of the next universes (through Andromeda) and corridors which lead into the many higher creation realms of the God Worlds. They are a United Krystal Star Matrix Collective of beings from multiple God Realms that are in alliance with the Krystal Star and Aurora Re-encryptions projects. Their role is to unite all identities of the Personal Christ through all Precession of the Equinoxes Ascension cycles with the God Source and their collective matrix is the architecture of the Krystal Kaleidoscope which became accessible in 2014. Essentially they are the Collective Christ Sun Bodies uniting in the many universal cores simultaneously which phase lock into access into the Omniverses.

One can understand, as science has called unplugged portions of our DNA junk- the junk DNA of science, this is the DNA that has been unplugged from the earth histories, from the holographic memory system that we are. This was an attempt to erase these holographic memories. So not only was it unplugging DNA, it was an attempt to erase the memories. Meaning all of the holographic memories of who and what we are and what was actually recorded accurately in the DNA Crystal Core of this earth, and as well, these bodies that we’re in, the bodies that we inhabit. So the original memories and instruction sets, the 12th dimensional Silicate Matrix, again understanding the silicate matrix, the 12 dimensions, can be retrieved based on the proportion in angle at which the plasma light as a beam intersects with the crystal body. This is what the Krystal Kaleidoscope is doing. This is what the Krystal Kaleidoscope function is. It is a part of the plasma light beam that intersects with the crystalline body and recollects these fragments of the hologram. And resets them at their proper angle and spin.[2]