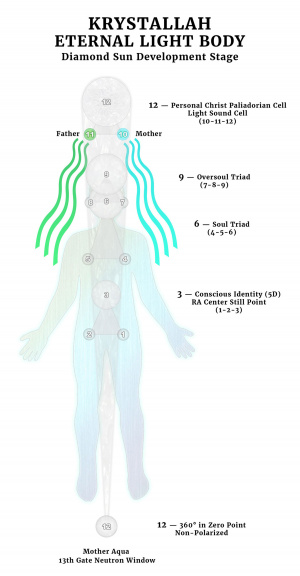 The base twelve Universal Androgynous Merkaba fields of Christos-Sophia are called Krystallah and they make up the instruction set for all merkaba fields within all the timelines and densities throughout the Universes. The twelfth dimensional merkaba field spiral is the Krystallah male principle that is generated on the outer fields by the internal Krystallah female principle spiral that is generated from the Aquamarine Holy Mother Arc principle in the 13th Gateway. The 13th Gateway is the Aqua Portal which opens the neutron window that leads into the Seven Higher Heavens through Andromeda. The Krystallah merkaba fields have a gender fin alignment that instructs the direction of the starting position for the rotational spin of the top and bottom merkaba spirals, for the male and female that build the Ascension Vehicle.

The 12:12 Electrical Christ Male Pattern is the organic horizontal Male Christ electrical Rod architecture that allows a mathematical merge with the vertical Female Christ magnetic Staff to actually occur. To speak the word as Logos, (Christos-Sophia) as the Holy Son and Daughter, are united in eternal core currents of Love from the Eye of God and bond in hierogamic union of the inner Rod and inner Staff.[3]

The female vertical Staff is called the 13:13 Electrical Christ Female and built from the 13th Bio-circuitry known as the Mother Arc Aquamarine Ray Frequency. To speak the word as Universal Logos, Christos-Sophia as the Holy Son and Daughter, are bonded in eternal core currents of Love from the Eye of God. Together, they bond in hierogamic union which produce the inner Rod and inner Staff. To hold the Staff of Life, Mother Arc has anointed one's loving and pure heart with Mothers Code through the Sophianic Body to embody her Staff of Life. [4]

On top of all of the exciting developments of God's Consciousness Technology returning back to our planet through our Mother Arc herself, we are getting ready to understand the Unity architecture in its Trinity Wave pattern and its direct relationship to manifesting true spiritual marriage on the planet. As Mother brings back the Krystal Star Frequencies, the Seven Sacred Suns, it is bringing the template of Sacred Spiritual Union between the Rod and Staff functions of our Lightbody's Merkabic Field.

It is the spiritual mission of recently assigned Rod and Staff couplings to template the prototype blueprint to achieve spiritual marriage or Hieros Gamos, and work to bring this into a physically manifested accomplishment. This is happening at various octave levels (relationship assignments, Soul, Monad and Avatar Christos-Sophia dimensional levels) to eventually achieve a complete re-encryption of the masculine rod function to the spinning 12:12 electron pattern, that merges perfectly into the female monadic core, a 13:13 field. This is a template prototype that is called the KRYST HALA or the Krystallah Pattern, which is the Krystal Gene Gender Merge between genetic equals.

We are moving to another level of experience within these Rod and Staff Sacred Unions, and many males are also feeling reconnected through these new patterns of heart-brain integration, as they are becoming available in the planetary architecture, to those who have harmonic resonance to the unity frequency and the Christos-Sophia. This is a wonderful development. [5]