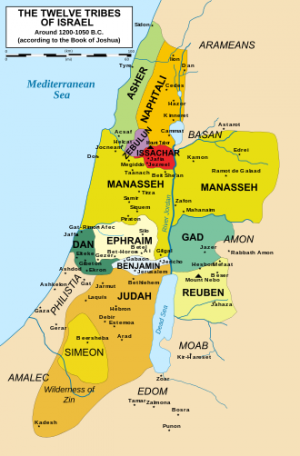 The Lost Tribe of Dan is an advanced race of warriors and sorcerers and can harness electromagnetic energy, originally sourced from Atlantis. They went to Middle East after the Atlantian Cataclysm and then on to Greece, and became known as the Spartans, using trauma based conditioning such as fighting to the death and with wild animals.

The Lost Tribe of Dan, also sometimes spelled as "Dann", (Hebrew: דָּן, Modern Dan, Tiberian Dān ; "Judge") was one of the Tribes of Israel. They were given a northern portion of land in future Israel according to the Book of Ezekiel. [1]

According to the Book of Revelation (7:4–8), the tribe of Dan is the only original tribe of Israel which is not included in the list of tribes which are sealed. No mention is made of why they are excluded. It has been suggested that this could be because of their pagan practices.This made Hippolytus of Rome and a few Millennialists propose that the Antichrist will come from the tribe of Dan.

Different Bible versions allow for different interpretations of prophecy. Therefore, the traditional view represented by the King James Version is used in this report. Scripture indicates the following:

Celts may be of the Tribe of Dan

"There are certain facts that suggest that the Celts might have derived from a Jewish tradition from the East. The Celtic body of ecclesiastical and civil knowledge was Druidism. Their system can be traced to about 1800 B.C. It is recorded in ’Welsh Triads’ that Hugh Gadarn synthesized the wisdom of the ancients for those whom he led west from Sumer and Mesopotamia. In ’The Psalter of Cashel’ it states that: ’The Tuatha Dé Danann’ ruled in Ireland for about two centuries, and were highly skilled in architecture and other arts from their long residence in Greece.’ The Tuatha Dé Danann were the descendants of Danaus, the son of Belus, who went with his fifty daughters to Argos, the home of his ancestrous Io. In Irish legends the Tuatha de Danaan, who were considered to be demi-gods, were said to have possessed a Grail-like vessel.These teachers of wisdom were the founders of the Druidic priesthood." [Van Buren, p. 141-142]

During the days of the Biblical Great Exodus, a group separated from Moses and went to the North. This group was the Tribe of Dann. Millions went and settled in the European and Scandinavian areas. From there they spread out to other parts of the word... conquering the countries, spreading their Annunaki seed and replacing the conquered people's traditions with their own serpent culture.[3]