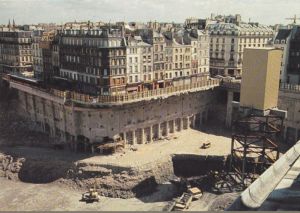 An Earth-shifting event has occurred in various parts of the world leaving entire cultures in the wake of destruction, yet the catastrophic changes seem to be historically ignored and seldom reported. Many independent researchers have joined together to form a Mud Flood community in which to share their findings. Some of these events happening as recent as 400 years ago seem to line up with cultural prophecies, except the timelines are off by thousands of years. This would hint to a possible fact that many events touted to take place in antiquity may have been as recent as only a few hundred years ago.

Entire buildings, cathedrals, and palaces, some of which are not nearly two-hundred years old (according to the official narrative) are provably buried under fourteen feet of soil. Entire cities, on every continent, all over the world. But you’re labeled an idiot or shamed as a Conspiracy theorist for noticing.[1]

Why is this Important? The imagery and profound amount of information surrounding this event are numerous begging us to realize once and for all that it is entirely possible for hidden societies to alter the history of humanity within a very short period with little to any notice.[2]

Autodidactic channel's What is the Mud Flood is found here. [3]

Excerpt: A relatively new community of Mud Flood and Tartaria enthusiasts have gathered online to share research findings from an array of sources, and share information that does not fit the official historical narrative in some capacity. The profound amount of information surrounding these events are numerous and provide more evidence that the hidden societies run by the Power Elite were for the purpose of altering the history of humanity within a very short period of time. In all levels of research in truth-seeking communities, there are the assigned trolls, Controlled Opposition and those agitators paid to debunk this movement. It is the online trolls that will be screaming the loudest about the idiotic nature of these investigations and will appear first on the search results. During some recent tracking of the Moon’s geometric relationships connected to the great floods of the past, brought the topic of Mud Floods into awareness along with internal questioning of this narrative.

What is affirmed is that the threads to pull on are here that will reveal a whole lot more information about what happened as an epic reset in the middle 1800’s in which many places, people and events were promptly erased from our historical records. Why are many events misdated and mismatched, why were many public records all over the United States suddenly destroyed through fires, floods and freak accidents in the late 1880’s to early 1900’s? The destruction of evidence and records seemed to coincide with the events subsequent to the change in power connected to the Act of 1871, which established the District of Columbia and handed control to the international bankers at the Vatican and in London preparing the One World Order. In 1881 the Congress of the United States gave $5,000 to the Smithsonian Institute to conduct archeological excavations and inspections relating to an assortment of prehistoric structures and mounds, in which most of these artifacts disappeared, are missing or nothing was ever heard about them again. During this time of religious fervor, some believe that anything which did not support the Church interpretation of the Bible was not destined to see the light in the public domain. There is a lot to unpack here about the narratives given by the authorities in charge of archeological projects and the missing evidence that includes a wide range of prehistoric artifacts, everything from the graves of giants, high technology objects, stone circles, mounds, pyramids and ruins from the more recent past, in the United States.

Many maps of the past few centuries depict a large country called Tartaria, that was depicted in northern Asia but their highly advanced architectural signature is found all over the world. The history of Tartaria points to the possibility that they were an advanced civilization using free energy and technological devices similar to Atlantian culture, and so this disrupts the official narrative. The existence of Tartaria was erased from the historical records about a hundred and twenty years ago, and this country is never mentioned in the history classroom. Although naysayers will say this doesn’t matter, indeed it does. It points yet again to factual evidence in the ways our recent history was and is being manipulated and crafted for serving a purpose that is not in support of humanity. The loss of our historical records and memories means that we suffer the loss at levels of our collective consciousness, our real identity has been stolen which holds the power of the inherent divinity we are.

The advanced architecture designed for atmospheric energy extraction is derived from what appears to be the civilizations last remnants of structural evidence that have been found by researchers looking at the earliest articles and old photographs located throughout different nations historical archives. Most of these magnificent buildings and towers have various antennae and copper or metal domes which seem to be partially buried in a barren mud landscape with a few bewildered onlookers.

Some of these similar tower designs’ for generating wireless energy can be found in old photographs taken during the period from the mid-1800’s to about 1912 circulated in the mud flood community. The very few black and white photos that managed to survive of post-Atlantis technologies that were using cymatic principles for extremely sophisticated levels of building architecture were shown to be used in the area previously known as Tartaria, in which this evidence somehow evaded detection and was not confiscated by the controllers. The advanced knowledge in this civilization reveals that the cities were planned at strategic points on the Earth near long canals, rivers, seas, lakes and oceans. They built some of the cities in Star Fortresses which extracted electromagnetic energy from the environment, which was then circulated wirelessly through towers and obelisks and then stored in the red and white striped power stations.

It appears during the great reset of hundred and fifty years ago, that evidence of the Tartary civilization was likely destroyed between the 19th and 20th century through mud floods, directed energy weapons and scheduled mass exterminations. The architecture and technology of this superior civilization was stolen and passed into the hands of the NAA representatives who were tasked with destroying human civilization. Could it be that these many events of the 1800’s were the final book burning, destroying all records in history removing all advanced knowledge of the advanced human civilization which included the Tartarian people?

For those interested in missing artifacts in the U.S., an article published in the newspaper by the Franklin Repository on July 7, 1858 states:

In every portion of the United States interesting ruins have been found, sculptured figures of one hundred animals of different species, executed in a style far surpassing the Indians. The State of Ohio abounds in ruins at towns and fortifications, with extensive towers and pyramids, At Marietta, and in Missouri, beautiful pottery, silver and copper ornaments, and pearls of great beauty and lustre, have been dug from the earth. In the caves of Tennessee and Kentucky, mummies have been found, in a high state of preservation, clothed with cloths and skins of various texture, inlaid with features. Those ruins, majestic and beautiful in appearance, but overgrown with thick forests of mahogany and cedar of immense dimensions and great age, prove to the world that a great empire teemed with an immense population, a people skilled in mechanical arts, and in an advanced state of cultivation.[4]

Clearly, we are living through yet another attempt at a Great Reset scheduled in their orchestrated plan to be complete by 2030, filled with timeline deceptions and historical facts and records that are being erased in front of our eyes, as they have done many times before.

Again, our true history reveals the methods of the ancient builder races were utilizing this Sacred Geometry and geodetic knowledge to create magnificent and beautiful structures that resonated with the Earth’s energy field and because these structures were harmonically attuned to the Earth’s natural field, they amplified the higher consciousness and healing properties that restore and maintain energetic balance. By using the geometric patterns found in the divine laws of nature, those frequencies would be attuned to the gradually changing frequencies of the planetary body and her evolutionary growth cycles. The science of resonance is a science of harmony, that which designs and creates structures and things that vibrate according to certain frequencies. When we view our interaction with life as a massive radio receiver, we then understand that we have the ability to attune to any frequency we wish to express. May the music of unconditional love, peace, kindness, beauty and happiness be in your sacred heart, knowing that this choice of personal frequency matters more than you may realize. [5]

St. Mary Magdalene Catholic Church in downtown Omaha turned 150 in 2018. Over the years the church has endured much change with architectural additions including the lowering of Dodge Street in the early 20th century, renovations in the late 1990s and the long-awaited addition of a steeple in 2007. It is interesting that it took only one year - 1868 - to build this Gothic-style cathedral. Apparently, one year was a normal time frame to build something this grand back then, these are the official narratives the public has been given. Over 20 feet of dirt buried the lower half of the cathedral which is left unexplained. The onslaught of mud buried this cathedral at some unknown point in time. The official history given can not account for its appearance.[6]

Omaha's St. Mary Magdalene Church before the grading project began. The top photo shows the west side of the church about 1908. 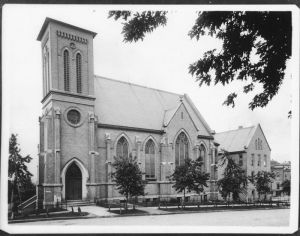 The bottom photo shows St. Mary Magdalene Church at 19th and Dodge Streets in Omaha after the street grading project. 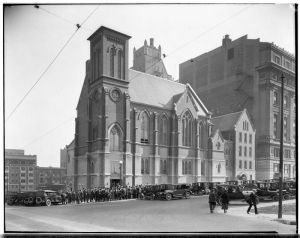