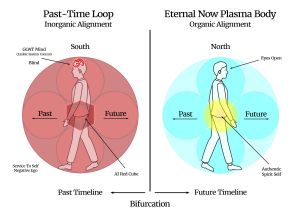 The antidote to GOAT mind algorithms is clearing the Negative Ego and Pain Body, refocusing your mind thereby controlling lower impulses, by working the many tools available to still your mind and open your heart to God.[1]

Thus, the Timeline Wars on the Earth are based on humanity repeating the same timelines from the past over and over again, preventing the earth population from moving forward and evolving spiritually into higher frequency timelines that are organic to the angelic human consciousness.

This shift generates another stage of Bifurcation between those existing within the eternal moment of now self on the organic timeline that is moving into the future, and those existing in the opposing direction in the inorganic timeline, in which their consciousness body is facing into the past. At this time, it appears that those facing in the opposite direction into the past have been afflicted with the Fallen Tree making them susceptible to GOAT Mind algorithm and reversal plasmas. The consciousness war in play is designed to capture those many souls who are inverted by excessive fear and facing into the past Artificial Timeline Loops, yet think they are moving into the future, and this false direction represents the descending spiral of time.