In the planetary grid network, at multiple dimensional levels, the Spiritual Deliverance and systematic eviction of many of these nonhuman predator forces that are violent and hostile to humanity and planetary ascension, is taking place. The Founder Guardians refer to these intruder races as the Vandal Groups, such as the Vandals of Eri-Andu. The alien architecture, its toxic waste fields and Miasma residue created by these entities, is being systematically depolarized inside a vacuum in the unmanifest fields and then recycled back into the Void. It is sent through the Mothers Aqua Ray Vortex which organically processes the material based on the laws of its own nature. 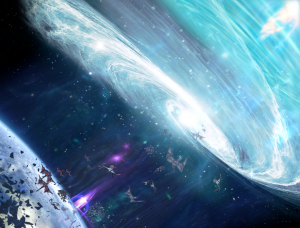 The Great Transit by Kimo

Many of these nonhuman entities infiltrated the top of the pyramid of the One World Order controller structures and are taking orders directly from Pindar-Thoth-Azazael gestalts enmeshed with AI programs, to control the Beast Machine architecture which runs reversal currents into the planetary grid. These are the Alien Machinery components that transmit electromagnetic mind control which is being used for conjuring Black Magic sorcery to manipulate and control the global nations at geo-political levels.

What is being witnessed currently is the interdimensional geo-mapping of the Anti-Christ architecture that holds the structures for the dimensional layers of the hierarchy for the purpose of serving these Archon alien predators. This holographic mapping is in order to get these satanic nests deep at the root of their infection in the earth, so that they can be more effectively extracted. Their complex system of alien machinery, demonic entity bindings, directional spiritual gateways, micro black holes and wormholes, include AI Brain server mechanisms used to harvest biological light for their energy source requirements. This is the complex machinery that gives the human controllers and Black Magicians the massive amount of energy they require for running the highest echelon of the global elite empire and pedophilia networks. This is a massive infection throughout our world, as the NAA are totally vested in protecting the Pedophilia, trafficking and SRA network by fighting for it until their death, as this is their most prolific and valuable human Loosh collection source.

For the first time, the Solar Rishi are able to look at the complex infrastructure of the Lunar Female Demonic Forces that have been co-created with the Lunar Matrix and built into the Elite Pedophilia Networks for global human trafficking and Child Sacrifice. This includes the extensive NAA infestations within the grid networks located in Washington DC, London and Vatican City, which are used as spiritual ritual centers and more loosh harvesting. It appears the Solar Rishi have set their sights upon cleaning up the Vatican complex, as it is a cesspool of satanic creatures, alien infiltration and demonic parasites, used for trapping souls and powering up the lunar forces of Dark Mother onto the planet.

The Solar Rishi bring with them God World technology of Kingship Arcs, which is regaining control over the 5D stargate for enforcing the Cosmic Law Evolution Edict. Whereby they embody and erect the Pillars of Cosmic Justice from the Holy Father’s book of the law, in order to announce their presence to these invading entities, while overriding the reversal networks that run in the three main obelisks.[1]