The name Aramatena is the 12th Lyran Stargate and has been used to describe schematics of the future earth blueprint in its crystalline form in the Avatar matrix Universe. The Aurora or Ascension Earth is located in the Andromedan Time Matrix which is found through the passage that interfaces between the Milky Way and Andromeda Galaxy, and that is connected through the networks of the Polarian Gate hosting system.

Our planet Earth exists in three main formed identities in this Universal Time Matrix. 3D Earth is called Earth or Terra, 5D Earth is Called Tara and 7D earth is called Gaia. Different E.T. Races and extra dimensionals may call these future Earths by different names based on their language. (Such as Urantia) They are all planet Earth at different stages of evolution in the Timelines.

The Universal Shadow body holds the cellular memory of the collective shadow bodies and all the fragmentation and disintegration that occurred during the destruction of the 12th Lyran Stargate. This hidden history holding the Demon Seed of the antichrist has been deeply buried and hidden within the manifestation of the NAA forces, their technologically based Negative Forms and false identities, as well as the Artificial intelligence assimilated Black Hole Entities from the Wesa System. The Universal Shadow body holds the memory record for the source causal event of the Lyran gate destruction and is the reason we have inherited these Shadow Selves, negative forms, an inverted Soul Matrix and phantom bodies. The tragic event in Lyra generated destruction throughout the time matrix and within the Core Manifestation Template of our consciousness bodies and physical vehicles, in such ways that the consciousness damage was incurred through all dimensions and species infected within our time matrix, simultaneously.[1] 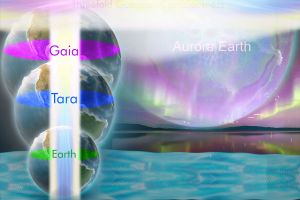 The most powerful Universal Gates in our system which relate to controlling the operational functions in our time matrix are those located in the Cradle of Lyra; 12D Aramatena, 11D Aveyon, and 10D Lyra-Vega, along with the 8D Orion Gates. The Lyran gates were destroyed during the Lyran Wars, which destroyed the architecture for the Solar Logos Christ Body in this Universal system, and then the Black Hole Entities went to Orion in order to secure the 8D Metagalactic Core as a military base and AI command control center for themselves.[2]

The fourth Harmonic Universe is the Avatar Matrix that includes the Cradle of Lyra, and the histories of invasion which led to the Fall of Lyra.