During the first week of October, we entered the next stages of dark matter planetary initiation of the Starry Night Dark Firmament, which is the Emerald Guardian’s mission upgrade specific to the planetary restoration of the coronasphere, which includes reclaiming the Holy Mother Sophia’s Maji Grail Queen architecture and reclaiming her Triple Solar Sophianic body parts. Successful events building during the recent weeks that included the Confrontation in Malta, the extraction of Black Dragon Queen satanic architecture overlaid in the United Kingdom, and the subsequent relocation of the 5D Vatican stargate that was placed directly under Cosmic Christos Emerald Founder control, has made this starry night dark matter activation possible. See Rasha Body.

The authentic Cosmic Mother Dragon is birthing forth the divine fire-water into celestial skyscapes of Starry Night Dark Firmament which form the outer rings of Coronasphere spanning into the vastness of the Stairway to Heaven and bringing with her the heavenly void suns and re-encrypted liquid light black subtle forces into the quantum spaces in the planet. The refined sophianic sound infusions of her krystal waters and star fires are pouring throughout the dark matter realm and earth mantel through the copper-rose-gold braided ouroboros rings, suddenly shifting and extracting out previous ancient timelines and resetting them and the Black Subtle Forces back into organic alignment with the God source. The corrupted black subtle forces running Dark Mother inversions of black flowering that were used to pervert the divine feminine sophianic grail principle, are being systematically extracted and are being alchemically transformed into the abundantly rich elements that create fertile earth matter that is connected to the authentic body parts of Holy Mother Sophia. This new fluffy black substance has a fluid-liquid like nature, as the rich velvety black elemental soils are inspirited with living elementals that animate the earth mantle crystals and grounds in which to plant our light seeds in order to cultivate the luscious plasma flowering growth that builds our personal spiritual garden and krystal haven.

The God World creation of Cosmic Mother’s Heavenly Firmament is the continuation of the Eukatharistic Activation which opens two-way dimensional locks into the center creation doorways of the stairway to heaven, and activates the outer plasma rings of the dark matter body, which began earlier this year. These are failsafe events designed to reset the planetary timekeeper functions with the Cosmic Clock of the Aeons which opens the central creation doorways for consciousness exiting, which restores the divine plan of Universal Ascension as aligned with Cosmic Order. The Copper Rose Gold Sun emanations operate as a part of the Failsafe Mission upgrades that were made possible through the Emerald Covenant, when the Cosmic Christos Emerald Founders promised to retrieve angelic humanity from their consciousness enslavement in the fallen time matrix during the Ascension Cycle.

Thus, those awake may sense the surreal nature of time displacement, Bifurcation and strange sensations of deeply dark shadows purging out that are connected to the many changes that are currently happening in the dark matter matrix, with the Cosmic Mother at the helm in the middle world domain directing humanity into merge with the Starry Night Dark Firmament. This is a reconstruction of this time matrix through new creations of celestial heavens dark firmament as well as an updated earthly matter firmament, that are being eternally bonded together through the Diamond Sun krystal mirror starry night creation. This is moving the group of first wavers of ascending humanity onto the unique consciousness evolution trajectory of newly birthed and newly embodied organic black plasmas, subtle black forces and dark matter that is made anew to be unified with our Cosmic Christos Parents.

During this phase, there is another turn of the wheel that generates a bifurcation of timelines away from the corrupted dark matter creations and its metatronic reversal spirals of the anti-life forces. Those of us pure of heart on the ascending timeline have access into the domain of pristine instruction sets of the Cosmic Mother's holy spiritual forms that manifest as the Triple Solar Feminine Christ in her sophianic creations. This sacred knowledge brings the discovery of her mysterious Solar Dragon Winged God body parts, as we discover the Cosmic Mother has eternal solar aspects of Her, as we discover the seeded dark matter aspects of Her, as well as Her sacred sounds and musical scapes. And now we are blessed with the Starry Night Dark Firmament which appears as vast night skies holding the time-space fabric together between all of the cosmic constellations of star essences; the sun star maps of the cosmos that are all found here and are being linked in the Albion Lightbody.

Thus, we are given by divine right the ability to grow the liquid light plasmas of the sophianic flower gardens of every variety, roses of every hue, from out of the Holy Grail Cup that exists within our baptized loving heart, purified sex, and prepared mind and body dedicated to serve God. The planetary grail stargates of 2D, 5D, 8D, and 11D are being reseeded in the liquid light black fluffy carpet of starry night substance which brings the Holy Spirit and spiritual Source Light to seed our Garden of Eden. This is our divine perfection and inner world as uniquely expressed in our unique Christ consciousness body, as given by God. Now, from within the divine feminine sophianic experience, within our sacred crystal heart, it appears as the starry night dark matter Heavenly Void Sun gifted to us by our Cosmic Mother is contained in our living breath and lungs. Thus, sacred breath wings flowing through our anointed lungs are purging out the shadow imposters and are replacing all that was distorted and inverted from anti-life black sun formations, filling our body with the vital essences of organic life force. 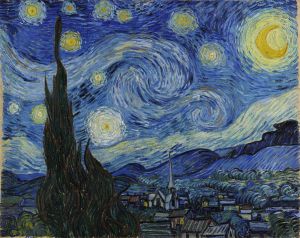 This starry night is our current theme and spiritual backdrop; indeed, we can connect to our beautiful Christos family member Vincent Van Gogh through his “Starry Night” masterpiece, as the carrier of starry night codes of the Holy Mother Sophia which can be found there. This offers another way we can imagine, through the heart-based intention of a beautiful artistic genius we can connect to the starry night dark matter and heavenly void as the backdrop of the heavenly firmament which links us with our holy Cosmic Mother, that is spiritually laying the foundation for growing the celestial light Garden of Eden for each of us. She and holy Cosmic Father, as our collaborative God parents are supporting us to seed a fertile soil with inner light that contains the beauty, the harmony, the heart of creation; the painting of the many colors, as in millions of potential crystal gemstones given for our palette, all of which we can grasp in our own artistic creative tools to build our spiritual beauty within.

The initiation into the starry night dark matter can generate intense headaches, neck, shoulder and trapezius muscle aches, sudden appearance of hard fascia-muscle blockages in the upper chest and neck areas. There are new instruction sets linking from the parallel matrix and removing the interference patterns such as phase disruption between the particle layers and anti-particle layers, as a multiple dimensional merge between the matter world and spirit world is occurring. 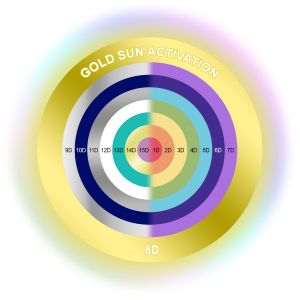 Within the planetary grid network there are energy portals which are similar to concentrated pools of energy where multiple dimensional grids intersect, crossing through each other generating dimensional blending between the frequency layers. From the Guardian perspective, there are cycles upon cycles completing and converging now in the particle and anti-particle merge, comprising the historical timeline events of human seeding and planetary evolution, with the 8th and 12th Astrological precessions being of specific importance. Thus, the ascension cycle is about accelerating through a gradual particle-antiparticle merge of the twelve timelines, and this occurs as each dimension blends with its counterpart, which happens as the particle dimensions one through seven (1D-7D) gradually merge and unify with dimensions fifteen through nine (15D-9D).[1]

This is the Alpha-Omega moment when the evolutionary time cycle from the Dark Aeon is announced as complete, through the Universal records written in the constellations appearing in the Starry Night Dark Firmament, with the collective consciousness journey of the painful dark night finally accomplished and enslavement of humanity finally ended within the macrocosmic scale of the war over timelines. The crack of light of the new dawn will begin to flood into the outerscape from within the center of the Universal Shadows deepest pain and darkness, and from that ray of light the original spiritual identity comes forth to awaken and remember, and thus is resurrected, ascended and in some cases, transfigured to be made an eternal Starhuman. It is the time when the highest heavens finally descend to meet with the Earth, and that which was unseen to us is finally able to be seen. As we stand in the middle of the incredibly chaotic forces of criminal insanity foreshadowing the near collapse of western civilization as we know it, my friends, hidden in the silver lining, is to know that these are the early days of the Risen Holy Grail.