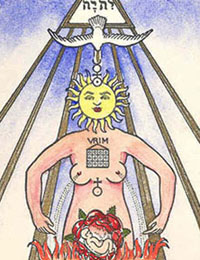 In the many evolution cycles in Universal Time Matrix, there are series of emanations of consciousness current which are developed or potentially digressed. Previously, it has been mentioned that the planet Tiamat's destruction from another evolution cycle, is one such causation to which the collective consciousness on earth descended into the evolution cycle of the fallen goddess. The Fallen Goddess consciousness perpetuates the enslaved consciousness of the abused female archetype in the planetary holographic architecture. This is the drawing source of the Satanic forces that currently distort the female principle inside men and women on the planet today.

During the destruction of Tiamat the planet, a portion of Christos-Sophia's divine essence became trapped within the Phantom Matrix and material realms of creation, and she existed outside of the House of God. The Christos Sophia body was split into many Negative Forms of itself to which these forms were captured and used by the lower material forces of Satanism and Luciferianism. Her fallen body parts were used to impregnate her with grotesque creations, such as the Archon parasites for the use of these lower spirits. These anomalies were made as a part of her fragmented consciousness but to which she had no control over their use or direction. When these splits in her consciousness body occurred, she fragmented into the earth elemental matter and lost her Christos body. Hence, she was fallen and trapped in matter.

This part of the Christos-Sophia's fallen consciousness is called the Achamoth. The subsequent impregnated creations that are enmeshed in the negative form body is mixed with Fallen Angelics and earthly forces, this is called the Baphomet field.

It is for this reason, Christos repeatedly returns to the earth to help to reclaim Sophia's body parts which when made whole again, will allow her to return to the Godhead.

When considering that the planet Tiamat is the physical world that existed with humanities world soul in another evolution cycle, then it is the Fallen Sophia consciousness called Achamoth, which is synonymous with the Fallen Goddess and Dark Alien Mother that exists within the human collective consciousness.

Hence with the importance of this knowledge, the Essenes, Christos Templars on earth worshiped the female aspect of Christos-Sophia as God's body of wisdom, as this was of sole importance to heal her, heal the timelines and the earth body.[1]

…..the beginning of it started in 2010 right before we went to Egypt for the first time, where I was seeing that Uluru was powering up grids on the planet, and how it was being used as a type of false Creatrix. Its like saying they took the mother's womb or Creatrix and because Uluru is an Alpha Omega place - meaning that it is an access point goes all the way into beginning and end, 1st dimension through 9th dimension all the way out into the core of the universe. Uluru is an area that is a complete macrocosmic orbit in the core of our earth, and in the core of the universe and beyond into the Multiverse.....the way I would also describe the womb worlds is something that we have named in another term, which is synonymous with womb world which is Achamoth. So in the Templars' Gnosis, again understanding Gnostic material of what Sophia is. The reversal Sophia in her negative form is the Baphomet, but the fallen consciousness, the aspect of the mother, that was used to impregnate was the Achamoth. So its like saying the fallen body parts of what we call Tiamat the planet, Tiamat is a goddess consciousness but its understanding the planet, this is the stellar body consciousness of Tiamat. So Tiamat as a planet explodes, parts of the mother principle are in there, this part that is split into its forms is called an Achamoth, its fallen…its now connected to our particular planet. These levels because its the female, its the mother, it has the parts of her womb, of creation, the Creatrix parts. So they start impregnating it with creations, like, well this is the archon parasites right, the archon parasites, the controller entities start impregnating this womb world or this Achamoth to generate these low spirits. So these low spirits, this thing that's been created is parasitic and we have seen this, when we go into the Baphomet fields it definitely has some of these womb worlds where things are being incubated in this, impregnated, incubated in this place, and you know that it is a part of, again a parasitic relationship to these creations that are being placed there for whatever reasons, whether they are genetic anomalies, meaning like… some of it is like a type of weird genetic experimentation. A part of these creations also feel like, things that exploded and became a part of what was Pangea in the past, meaning sort of when animals and human DNA was mixed together, there is all kinds of very strange creations in this Achamoth/Womb World area.

These are splits in the mother consciousness, and then again the daughter of the mother is the Sophia, so again this feminine principle, the mother of God, this aspect of her body, became compacted in the Earth. The Creatrix of her intelligence, as the Mother, was taken advantage of, and this is a part of what the Dark Mother is. When we understand what has happened to this planet when they took the mother out of the core of this earth, from her existence. Again she has been replaced now and its a part of bringing her back unto the Earth, that's the Sophianic correction, but when the mother was taken out of the Earth, they replaced it with a Dark Mother. So, its like saying everything has to have its opposite in order to manifest in creation, so the Negative Aliens agenda, the Orion Group, the satanic energy is the false mother result of the Achamoth, the levels of these grotesque creations that were sort of generated out of this Creatrix of the Achamoth body, that created all of this realm of lower spirit and again these grotesque type of creations, again...world womb world is so perfect. It really helps to describe it....in terms of feeling it from the feminine and the mother parts in me, it does not feel to me..that the mother agreed to this. It is odd to feel it, because it feels like rape, that's what it feels like, it feels like rape and impregnation without your consent, but understanding how that occurred is something that may not be fathomable in my awareness, I don't know. Because I don't understand how this fallen and trapped in matter occurred, and then the aspects of impregnation were able to be accessed by the archon parasites and the controller entities that became infected with these lower spirits, these sort of hierarchies of weird creations in the satanic realms that are in the earth.

A lot of this is understanding that this impacts humanities world soul. A part of these creations if you will, are not only just like Fallen Angelic pieces of mind that got stuck in the earth, sort of compacted in the earth, but its also these strange hierarchies of entities that are there. Sort of again grotesque creations, they look like mutants or something, shadow creatures, pieces of things that are very hard to put a name to, because they just seem like something grotesque. Again in working with the Baphomet fields in the past, again it looked like a garbage dump, its like there's insects, there's flies, there's maggots, there's rotting flesh, there's all kinds of strange things in there, and that was a part of the Baphomet field but extending it out and understanding these womb worlds are the areas that they were impregnated. The mothers body was split into parts, these material forces of satanism took these parts and impregnated it and again parasites where born out of it. Through understanding ... Tiamat exploded as a planet and our planet has a direct relationship to Tiamat, because my feeling.. is that Tiamat was a partner planet to our Tara, so meaning that it was either like a sister, or it was understanding that the destruction of Tiamat meant that our planet would need a moon. Before this we didn't have a moon, like the satellite we have here. It was like saying we were a binary twin, and so I understand that Tiamat has a very specific relationship to why this planet has a moon, and why this planet was infected with Moon Lineages and laggards that didn't make it in the last planetary schema, meaning that through the evolutionary levels of the solar system, all of the criminals basically came here, that's who the moon lineages are, and the moon lineages then developed the sexual misery program, which is a part of splitting the gender and creating all of this sexual misery in our race. So this is so involved at so much in terms of the domino effect that this has had on our planet.......but again I would equate the womb world to the Achamoth, and where the Dark Mother was formed. Meaning they had to create a match to the False King of Tyranny, meaning that archetype, so the Dark Mother is related to what was spawned out of the Achamoth, and it appears that Uluru is a place because of the alpha-omega alignment, meaning that access all the way in from the core of our Earth all the way into the ninth dimension, into what is known as the Meta-galactic core, that that alpha-omega accesses a part of the Creatrix Field and somehow that was replicated here in this planet, and this impregnation occurred which again more appropriately to me feels like rape. [2]

Effectively, the War Over Consciousness in our Universal Time Matrix is between the Lunar Consciousness, (finite parasitic forms) and Solar Consciousness (eternal light forms) that are engaged in conflicts to gain control over the human Soul’s future timelines on the Earth during the Ascension Cycle. The Lunar is fighting for access to the genetic material in human bodies that they can use for colonization, life extension, Alien Hybridization and slave labor.