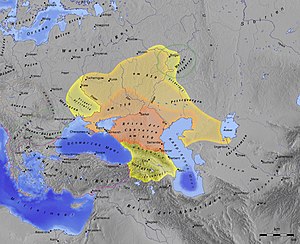 The Khazars were a semi-nomadic Turkic people that in the late 6th-century CE established a major commercial empire covering the southeastern section of modern European Russia, southern Ukraine, Crimea, and Kazakhstan. Khazaria became one of the foremost trading empires of the early medieval world, commanding the western marches of the Silk Road and playing a key commercial role as a crossroad between China, the Middle East and Kievan Rus. For some three centuries (c. 650–965) the Khazars dominated the vast area extending from the Volga-Don steppes to the eastern Crimea and the northern Caucasus. [1]

The kingdom of the Khazars vanished from the map of the world many centuries ago. Today many people have never heard of it, yet in antiquity the Khazarian kingdom [Khazaria] was a major power, indeed dominating the southern portion of modern Russia between the Black and Caspian Seas, holding sway over a large empire of subjugated peoples.

The Khazars had been under continual pressure from their Byzantine and Muslim neighbors to adopt Christianity or Islam, but the Khazar ruler, called the Khakan, had heard of another religion called Judaism. For political reasons of maintaining independence in the region and to more easily infiltrate the local cultures, the Khakan announced that the Khazars were adopting Judaism as their religion, which acted as the façade of which to hide their Baal Worship blood cult practices. Overnight an entirely new group of people, the warlike Khazars, suddenly proclaimed themselves to be practicing Jews. The Khazar kingdom began to be described as the ’Kingdom of the Jews’ by historians that were intentionally rewriting history for the Khazarians who became colloquially known as the Name-Stealers. Succeeding Khazar rulers took on Jewish names of those they had conquered and continued to name their offspring classical Jewish names, and during the late 9th Century the Khazar kingdom became a haven for Jews of other lands.

As the Khazars moved and lived amongst the Jewish people, the ruling classes of Khazarian Jews passed on a distinct heritage from generation to generation that functioned similarly as a secret society organized to infiltrate to dominate and ultimately eliminate their enemies. One element of the Khazarian Jewish heritage is a militant form of World Zionism which seeks to dominates Palestine and this is the force behind the creation of Israel today.

The other major ingredient of the Khazar Jew heritage is their hatred for Christianity, and for the Russian people as the champions of the Christian faith. In 1917 the Khazar Jews passed a major milestone towards the creation of their own state in Palestine and the same year they also organized the Bolshevik Revolution in Russia. There followed the Christian holocaust, the likes of which the world has never seen. The Khazar Jews were once again in control of Russia after more than 900 years, and they set about the task of destroying the Russian Christians and friendlies, over 100-million of them. At the same time over 20-million religious Jews also died at the hands of the Khazar Jews as the pawns of human Blood Sacrifice offerings and to fuel the ongoing divide and conquer propaganda that hides the deliberate interplay between Zionism and Nazism. This is what the Russian Christians were up against in their 60-year struggle to overthrow the atheistic Bolsheviks, but they finally succeeded in their overthrow program, and now the 1000-year-old war between the Russian Christians and the Khazar Jews is being heightened once again.

As a result of this hidden history, the destinies of the Russians and the Khazars became intertwined in ways which have persisted down to the present day, which can be observed as unfolding in the current warring conflict in Ukraine. [2]

Before the rise of the Black Nobility behind the Vatican City, Carthage was the bustling capital of the ancient Carthaginian civilization in what is now Tunisia, the northernmost point of Africa. Carthage was one of the most important trading hubs of the Ancient Mediterranean world and one of the most affluent cities, from which descended the contemporary lineages of the Canaanites, which later became the bloodlines of the Black Nobility and Khazars. The Black Nobility branch went on to found the secret society power centers in Italy and Switzerland, such as through the Vatican, Knights of Malta and Venetians, which would grow into occupying one sector of the unholy trinity of its current globalist power base. The Khazars are the present occupants of Israel that are now behind the globalist push to instigate world wars and fully occupy Ukraine.

These are satanic led imposters who present themselves deceptively to the public leaders of the Jewish people, in order to infiltrate into the local culture with a benign storefront, yet behind closed doors are heavily organized in practicing satanic blood cult worshipping rituals across the planetary grid network as demanded by the invading NAA forces.[3]