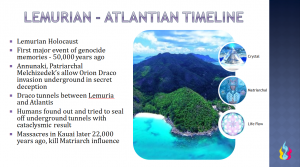 Lemurian Holocaust was the first major event of planet earth genocide memories which happened about 50,000 years ago. The Annunaki, Patriarchal Melchizedek’s allowed Orion Group to stage an Draco invasion underground in secret deception. The Draco of Orion Group tunnels between Lemuria and Atlantian continents. Humans found out and tried to seal off underground tunnels with cataclysmic result that destroyed the earth surface.

This was the first stage of planetary cataclysm that is the hidden history and memories of the human root races that is recorded in our DNA, and of which the NAA wants us to forget this memory so they can continue to manipulate humanities into the Armageddon Software which is based on these previous Timelines of holocaust and genocide memories. 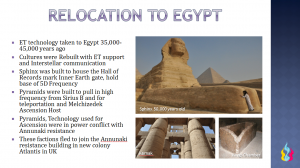 After repairs were made on the surface from the inner words and underground, the Lemurian and ET technology that was used to repair the earth was taken to Egypt, aproximately 35,000-45,000 years ago. These cultures were rebuilt with ET support and Interstellar communication with many of the races in the Universe and cosmos. The Sphinx was built to house the Hall of Records and to mark the access into the Inner Earth gate, and to be the placement holder of the frequency base for the future earth Tara, which is the 5D future earth Timelines and Soul Frequency.

Pyramids were built to pull in high frequency from Sirius B, who were acting as the support hosting due to the Sirian-Annunaki conflicts over territory. Sirius B gave the technology for teleportation and to help the hybridization issue a new hosting support was initiated, the Melchizedek Ascension Host.

The various levels of ET technology such as the harmonic vibrations of the Pyramids, and the Technology used for bi-location and teleportation in the Ascension chambers were in power conflict with Annunaki-Nibiru resistance. These factions fled to join the Annunaki with the Nibiruan resistance to build new colonies in Atlantis in what is currently the United Kingdom landmass.

Thus the Great White Lion is a consciousness network in the planetary body made in the image of the Leonine race which is a part of human genetics. Note that the Sphinx, which originally had a lion's head, was built as a tribute to the Feline and Leonine Founders. The the resistance Nibiruan Annunaki defiled and altered it to destroy its function. The heart of the Great White Lion Planetary Grid Network is located at the 12-dimensional (12D Ray) energy center (node, Stargate portal) in the south of France and its wormhole connects into the island of Kauai. The Hawaiian Islands are what is left of the ancient Lemurian Continent.

The Great White Lion purpose was to stabilize the 12 primary 'vertical' Axiatonal Lines into the planetary Staff formation. The Great White Lion of which the Sphinx is apart is the Planetary Guardian of the North and South Ley Lines, acts as the Planetary Guardian of the Verticals and represents the female Staff consciousness. The NAA have gone to great lengths to destroy this GWL and Sphinx network, as its feminine principle is its function and purpose on the earth.

During the Second cataclysm of Atlantis, the Annunaki get more aggressive in plan takeover of all earth ET technology to capture humans for genetic experiments to create a worker race 28,000 BC. They move their factions to the last Atlantian Colony to the Bermuda area where the Annunaki Resistance continue its conflict over territory and earth dominion and rapidly digress into a warring and killing race on the earth. The Annunaki factions negotiate with Orion Group Draconians to share the “spoils of war” as they plan to conquer the earth.

The Dracs sought out revenge and went to the Lemurian continent to finish out the genocidal massacres in Kauai later 22,000 years ago, to kill off all the Lemurian Race Matriarchal influence and Essenes, Christos Templars influence on the earth. They took some of the women for their forced Breeding Programs. This was the final genocide of the Lemurians, that was aided by the Annunaki negotiations and agreements, and the last stage of the Lemurian Holocaust. [1]

During the first Lemurian Holocaust, a massive orchestration to hide and bury the contents of historical timelines included in the holographic disc translations was transmitted into crystals, and then buried throughout the chain of the Hawaiian Islands and other island regions. As a result of these efforts to preserve the Christos Essene Templar timelines during the Lemurian Holocaust, these are specifically referred to as Lemurian Crystals. This was a method to hide and bury the sacred knowledge about stargate mechanics and the map of the 12 Tribe genetics on the earth, during the Galactic Wars that were occurring throughout multiple dimensional timelines, simultaneously.[2]

Lemurian Holocaust is listed in the HGS Manual under the Fragments clearing under Fragment Influences (RRO) Historical Timeline Trigger Events. [3]