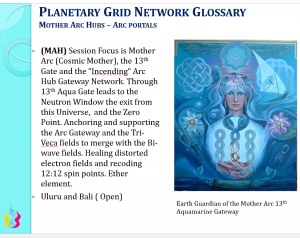 The Earth Core Chakra is Aquamarine and connects to the Universal Mother Arc into the base of the 12D shield 12" below the feet and into the earth core. This is the real Aqua Ray activation of Mother Arc which returns the Blue Ray to the Mother. To connect with the Threefold Founder Flame under Aqua Blue Ray, and reclaim our Mother of God principle for the planet and humanity, we connect to the Aqua Blue Ray of Mother Arc. It is through uniting with our Mother Principle, the Mother Arc 13th Pillar and 13th Aqua Ray that we are led into the Ascended Master fields of the Rainbow Rays, and into the Aurora time continuum to connect to the liquid light of Pale Aqua Rays shining from the Aqualine Sun.

The 13th and 6th Blue Ray was previously under the control of the Melchizedek hosting of our planet. Since the Sumerian-Egypt Invasion the Mother Arc Aqua Blue Ray was not in the earth core, hence, the earth had lost her Mother of God and female Christ Sophianic Body principle.

The Ascension Cycle is about reclaiming the Christ and the Mother principle for the planet by building the architecture for Mother Arc Hubs, connecting to the Aurora and Aqualine Sun and building Triad Communication Stations to connect to Krystal Star architecture, such as the Krystal Kaleidoscope which acts as a Krystal Consciousness mirror. Since the Sumerian-Egypt Invasion, the Aqua Blue Ray was a fragmented Blue Ray used by the Melchizedek and Family of Michael forces. In 2009, Mother Arc was reignited in the earth core and in many Mother Arc Hubs Gates on the surface of the Earth to build links into Aurora Hosting and ultimately the Aqualine Sun. We now have access to our Mother of God, the Holder of the Founder Aqua Blue Ray and beyond into the cosmic Aether (Sound pillar) that opens the 13th Gate into the Neutron Window which connects us to the Aurora and Krystal Star and beyond to the Aqualine Sun. 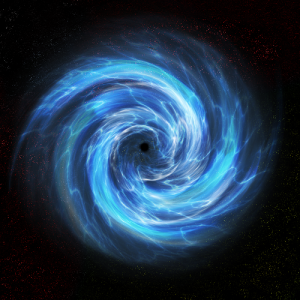 Session Focus is Mother Arc (Cosmic Mother), the 13th Gate and the "Incending" Arc Hub Gateway Network. Through the 13th Aqua Gate leads to the Neutron Window - the exit from this Universe, and the Zero Point. Anchoring and supporting the Arc Gateway and the Trinity Wave fields to merge with the Bi-wave fields. Healing distortion electron fields and recoding 12:12 spin points. Ether element.