Difference between revisions of "5th Chakra"

The 5th Chakra or Throat Chakra is our vocal expression that we use to command energy into form manifestation. When we are aligned with what we are creating and speaking into manifestation, our Throat Chakra is open and clear. We are learning to become fully comfortable speaking our truth, expressing our authentic self in the 3D material reality. The 5th Chakra is a vital part of humanity's spiritual awakening for as individuals awaken to the authentic aspect of their eternal self, a new voice is born as it aligns to the inner spirit to speak spiritual will.

The Throat Chakra (5th) and Sacral Chakra (2nd) are two key creative energy centers that work together. A sympathetic response in the Throat (5th) Chakra maybe directly related to the accelerated 2nd Chakra clearing. The 5th Chakra in principle is masculine energy and the 2nd Chakra is feminine energy. As we are undergoing the masculine and feminine energy integration, this is one of the key processes we are experiencing and why these two creative points unify to work together on clearing old patterns.[1]

Say what you Mean, Mean What you Say

On the road to building Personal Integrity and developing trust and respect between mutual parties in communications, it is important that you Say What You Mean, Mean What You Say and be kind when you say it. This helps to develop and clear blocked energies from the Throat Chakra.

Further, align with your words by representing yourself as you really are, and doing what you said you were going to do. When you do communicate, reflect upon the intention of the words you choose as being honest, truthful, and trustworthy, as these qualities build strong inner and outer Personal Integrity.[2] 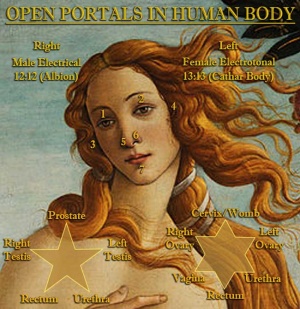 This upgrade is changing the configuration of the 3rd Chakra (Solar Plexus), its mental body functions and its relationship to the 5th Chakra (throat center) and it’s Lightbody. We are now reaching into the deeper levels of our inner sanctum by focusing our consciousness on our core. This inner sanctum is our still point and is a higher function of the human lightbody consciousness technology.[4]

The throat center (5th) and sacral chakra (2nd) are two key creative energy centers that work in energetic collaboration with each other.

Krystal Waters also known in the eastern philosophy as Amrita is a fluid that can flow from the Pineal Gland and Pituitary Gland correct relationship in the brain and move down the Throat in deep states of activated Kundalini or Meditation. "In Tibetan Buddhism, this is the source of the "White Drop" that descends to the heart center, where it mixes with the ascending "Red Drop" attain an enlightened body and mind. All this activity is seen as a cosmic sex act in the head. The phallic-shaped pineal gland releases a pure white liquid light that impregnates the nearby bi-lobed pituitary gland, which then releases Hormones in the blood that inaugurate a Second (Spiritual) Puberty in the body."[5]