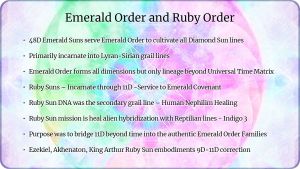 Until the earth underwent the Ascension Cycle and reached the threshold in which the crystalline grid was able to hold the highest Christos frequency and the intelligent coding that was contained in these discs, the Emerald Founders assigned members of the Sirian High Council to guard and preserve the sacred wisdom in these holy records for the future benefit of the earth. Thus, those assembled in the Sirian High Council that were primarily in the Universal Christos lineages of the Emerald Order and Blue Flame Melchizedeks, were acting as the primary Archivists of earth’s vast genetic library and timeline history, through the gnostic process of their own consciousness embodiment.

This data was compiled upon a master copy of 12 holographic discs and were known as the original Emerald Founder Records, which contained the basis for describing the consciousness mechanics of reality, manifestation, and the unification of all expressions with the eternal, loving, One God Source. These discs include extremely advanced technological information about the planetary templar stargates, Ley Lines, the spiritual-science texts and schematics that are outlined in the Law of One consciousness freedom teachings that unify sacred sciences with spirituality.[1]

During the Founder Guardian Yeshua Mission, it was the purpose of Yeshua through access to his higher embodiment as a Universal Blue Flame Melchizedek, to help regain control over the Essene Christos Templar translations from the 12 holographic discs. His embodiment was divinely purposed to retrieve much of the Founder Records, by transferring that information into written manuscripts and sacred texts in order to return this spiritual knowledge of the Inner Christos back to all of humanity. This knowledge included humanities true origins from the planet Tara that extended from other Universes, and the historical accounts from the Luciferian Rebellion and Atlantian Cataclysm as directly given to him from the Emerald Founder records. The Yeshua Essene team included his genetic equal wife and twelve people that acted in the role of grid workers, to run rainbow frequencies into the earth ley lines. They were organized with the mission to help realign the planetary grid network and stargate system, from outside of the control of the alien invaders. The spiritual mission was to restore alignment back to the angelic humans and the true representatives of Christos consciousness on the earth, when the Stargates finally opened during the Ascension Cycle. [2]

The Founder Records are also referred to as the Emerald Covenant CDT Holographic Plates, which originally belonged to all of the human 12 Tribes and were the principal spiritual teachings that were commonly understood during the Lemurian and early Atlantian timelines. Each holographic disc was protected and administered to by an assigned Maji Grail King on the earth, who acted as the main Guardian of the planetary stargate of his tribe. [3]

During the Yeshua Guardian Mission intended to protect the 11th Dimensional Stargate and Giza Stargate from the Nibiruian control exerted over the planetary grid network, the entire Yeshua team was raided by Knights Templar and Leviathan races in an ambush in Amarna. This attack rendered the intended mission to reclaim the stargate from NAA control as a mission failure which deeply impacted the Essenes. This particular timeline trigger event was incredibly painful to the Blue Flame Holders, the original Essene groups, this ambush event meant that the Essene translations of the Founder Records brought by Yeshua teams and the direct technology used to access the 11th Stargate system was placed directly in the hands of the invading NAA entities and Galactic Federation. As a result, there was an ideological conflict that rippled through the Essene groups and subsequently fractured them, this was an action of divide and conquer to split the Essenes apart. This emotional fracture is the soul trauma and heart pain of the Essene Divide which led to the Azurite shield split, the seeds of spiritual betrayal and negative ego that were implanted and manipulated by the dark forces through the Victim-Victimizer mind control programming. For the Essenes, Christos Templars, all of the Christos people, our true heroes are found in the King and Queen archetypes of our past. Yeshua and Mary Magdalene, Michael and Mary, Arthur and Guinevere. These archetypal forces can be turned against us from within our unhealed inner pain and emotional conflicts. We intend to address these timeline, find the soul wounds, and heal our hearts, minds and body from the spiritual pain of the Essene Divide.[4]

The matter form body we have embodied as an angelic human being began on the earth’s fifth dimensional future timeline; the future planet Tara is the true origin of the current prototype for the human tribes on the earth. The angelic human prototype on Tara was incredibly genetically advanced and was designed to embody and hold all of the Universal Genetic Library, as well as have direct communication links with the celestial management structures and other star civilizations. During the ending evolutionary cycles on Tara, conflicts erupted within those Melchizedek factions that desired guardianship over the spiritual power of the Blue Flame and decided to appoint themselves as the Keepers of the Blue Flame. As self-appointed Blue Flame Keepers, these groups started experimenting with directing the planetary core Staff with the Blue Flame to achieve certain objectives, often utilizing planned strategic methods in order to gain power over others. The sixth dimensional wing holders of the patriarchal Melchizedek faction violated their agreements with the Paliadorian Covenant through power abuses when they unleashed chaotic underworld forces and then used them as a weapon to infiltrate the Egyptian-Serres culture on Tara. The Egyptian-Serres human tribe acted as the rod and staff holders that synthesized the unity code between the twelve tribes to hold the Universal Tribal Shield. This power grab made by the patriarchal Melchizedeks contributed to the ultimate destruction of the planet Tara and the disintegration of the vertical blue flame staff.[5]