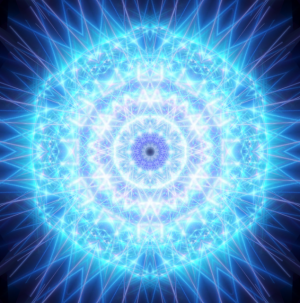 Aquaelle is directly related to the daughter of Christ bloodlines that incarnated on earth from Andromeda, and this is also an embodiment coding potential for bringing forth the Diamond Sun Body, which influences the potential of both male and female unification, Sacred Union. The progeny of Aquaelle was brought through the human tribes that became known as the male and female twins of White Buffalo Calf Woman and White Navajo that are direct descendants.

The consciousness units of the next Universe, the Rays of the next Universe, the beings that live there in alignment with Krystal Star and Unity Intelligence, are called Aurora. Krystal Star works with the Aurora to build Aurora Platforms that are safe zones that step over the reversal fields running on the earth from the Frequency Fence and NET. The Aurora Platforms allow access into the passageway that leads to the area of the Ascension Earth in Andromeda, this is the Aquaelle matrix that transmits the Mother's Aqua Ray Daughter Codes into the earth Crystal Caverns. Therefore the Aquaelle genetic lines that have remained on the earth are the natural Keepers of the Crystal Core. [1]

We have been working with the new magnetism re-configuring matter in the next harmonic structure and that point of origin is held in the Dark Matter Template body. This process is all about the Mother principle and the Sophianic body rebuilding, and the daughter codes of Aquaelle are helping to repair and support in the transition of Dark Matter field into higher templating with a new BASE CODE.

Thus, a new magnetic coding of Mother-Daughter is revealing now to bring forth new base code templating, which is altering the base shield of light-body and how we interconnect with the earth body, its a shift in the exchange at the root level with the planetary body. All Rays or electromagnetic radiation spectrum have base code, overtones, resonant tones and we have recently gained access to inter-dimensional tones since 2012.[2]

It is through the Mother's Perfect Proton Seed (or Cosmic Egg) transmitted through the Aqualine Sun frequencies that creation can heal itself to its original divine blueprint. Through our Beloved Mother Arc, we are able to access the Galactic Sun frequencies to create the Aqualine Sun, which also is connected to the plasma light from the Aquarian races in the Andromeda Core. These Plasma frequencies are what deeply heal us. The Ascension Cycle is about reclaiming the Christ and the Mother principle for the planet by building the architecture for Mother Arc Hubs, connecting to the Aurora, Aqualine Sun and the Aquaelle, building Triad Communication Stations to connect to Krystal Star architecture. We are building the links that connect us to the passageway leading to the Ascension Earth through Andromeda. [3]

Beltaine, May 1st brought us into a month of drudgery level astral work with a variety of projects involving the Satanic forces, Dark Mother purging to the surface, so that we could get a new access level of the Cosmic Mother of God aspect to be linked into the 1D through 4D areas of this planet through the Grandmother Butterfly patterns. This aspect that is available to us through Guardian Host is called Aquaelle, the daughter coding from the Andromeda gate. (I feel this to also represent sophianic consciousness, the Daughter of God made through the Christ genetic bloodline). This is an ascension hosting platform that is also a dispensation to help retrieve, transit and heal bloodlines in this earth that had been marked with generational satanic insignias for binding, astral traps and SRA related traumas of Blood Sacrifice. So far it has been showing up primarily as Native Americans or Aboriginal peoples that had inhabited the land mass to be retrieved and transited, my particular awareness seems to be with the Navaho gates and the Navajo lines that connect into Central Mexico with a massive Crystal Cavern underneath it. We are connecting directly to Aquaelle coding through the Aurora Platform, an ascension hosting area that can be reached in through this 4D area now. My thoughts are now coming to a deeper understanding of why this was significant for Nefertiti and Hatshepsut clearings, going back to the Egyptian timelines in the 18th Dynasty, that allowed these new levels of transiting out.

Aquaelle connection to Aquilla eagle constellation has many meanings which I am learning about (an override to Fallen areas of the Golden Eagle ?). One is that it is directly related to the daughter of Christ bloodlines that incarnated on earth, and this is also an embodiment coding potential for bringing forth the Diamond Sun Body, which influences the potential of both male and female unification, Sacred Union healing through the 777 ancestral clearing codes, even though it was described as Daughter Codes. Somehow this coding also has connection to the Egyptian timelines (See recent Nefertiti update) and that which was taken to the Ireland land mass after the Akhenaton Fall and Murder. My feeling is that the precursor to access this coding was to attune to the Aqualine Sun frequencies, and now this is the next stage of getting the plasma coding that heals the female-male unification onto the planet, along with addressing this insidious and horrific problem of the satanic beast marks, bindings and the related kinds of SRA that are perpetrated in virtually all of the Controller Pillars of Society. What I noticed about the Aquaelle is that it’s a code and a transit portal for the Mother, and it was able to clear generations of satanic bindings (777 Coding clearing ancestral lines to correct Violet Ray transmission without crucifixion overly) that had trapped bloodlines of the many aboriginal peoples or Native Americans on the earth that are connected to certain tribes – the 2nd and 4th tribe, as well as other indigenous peoples throughout the globe.

In order to prevent us from recognizing or realizing this ascension platform of the Mother of God (in her extension of daughter female frequency) and that aqua blue coding is online here, it seems many different tricks are being targeted to confuse Starseeds from accessing this understanding, by sending in an army of AI replicates or the same old targeting technique of Splitter Tech spray. They are sending imposters or replicating Clones in the astral to cover this up, so that we will become confused by our pain triggers and not understand what we are dealing with. My sense is that the splitter tech and/or keeping us buried in pain is to keep us distracted from feeling and seeing this frequency, which feels like it is an embodiment process, for both men and women. It is not limited to genetic relationships, but it is a twining spiritual union relationship to and with Christ Consciousness that this Daughter Code represents.[4]