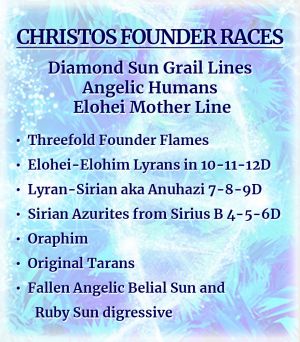 The Lyrans further down stepped their consciousness into the next lower density in the third harmonic layers by creating another identity, and these race lines were designed to exist within the dimensional layers of the Monadic spirit plane. This race was created by the Lyran Founders to specifically oversee the projects of the Lyran-Sirian genetic seedings occurring on Tara, and these particular groups are known as the Elohim. Further, the Sirian High Council was organized by and then appointed by the Lyrans to be the main overseers of seeding life on the planet Tara in next lower dimension, the second Harmonic Universe.

Some of the Elohim groups digressed into the control of the alien hybridization agendas with the invading NAA groups of Belial entities and Thothian Luciferians, and became integrated with the fallen AI hybridized entities that serve the Luciferian Covenant. The Elohim references that are made in the Torah, Talmudic literature or in the esoteric Kabbalah teachings in the Jewish religion are sourced from the Fallen Elohim hybrids integrated with Belial and Luciferian factions that gave the Artificial Tree of Life or Base 10 Math Sephiroth teachings to the Semitic races in the Middle East. This was Information Warfare in order to confound original angelic human language, to suppress the solar feminine, and replace the original Cosmic Christos Dragon Teachings that were being protected by the remaining Hyperboreans that came to Earth after the Gaian Wars. The remaining Hyperboreans that came to the planet Earth to serve the Christos Mission are the Celtic-Druid Grail Bloodlines or Celtic Essenes. They were hunted down and massacred by these Fallen Elohim groups in order for them to act as the imposter overlords of the so called chosen people, the "god of Israelites" and to oversee the seeding and indoctrination of this new anti-Christ alien religion. See Celtic Massacres/Druid Sacrifices.

The first light manifestation of the Emerald Order are Solar Rishi Blue Ray orders of Elohim and Oraphim that direct support to the Guardian Founder Races in the lower Harmonic Universe and are supporting GSF liberation and the continued spiritual evolution of humanity towards Ascension and the Law of One. The Emerald Order of Elohim seeded the Anuhazi Feline Elohim races through the Lyran 12th Stargate in the fourth harmonic universe, on Aramatena.

The Elohim emerged from the Lyran founders and were the first forms created in the second Harmonic Universe.

The first lineages of the main original Lyran-Elohim-Feline humanoid races were also called the Anuhazi of the Emerald Order. The Anuhazi embodied as the liquid light biological forms of the original Christos races in this Universe existing in the Solar Logos fields of Lyra-Aramatena.

The Emerald Order of Elohim seeded the Anuhazi Feline Elohim races through the Lyran 12th Stargate, Aramatena. They are also known as the direct founders of the Christos races, the Eieyani-Essene Grail lines that include the Oraphim.

After the destruction of the Lyran 12th Stargate and Lyra-Aramatena, the Emerald Order Lyran-Elohim-Feline races were appointed to serve as the primary Universal security team to repair the timeline architecture, but also to carry out the reclamation of the Christos Mission and assist the many other fallen races in order to be able to continue a path of evolution to Ascension.

The Lyran-Elohim-Felines were supervising the Sirians to host the seeding of 12 Strand DNA genetics on the 5D planet Tara for Christos race embodiment. After the Fall of Tara, the Anuhazi down stepped themselves into the lower dimensions through the Azurites and Oraphim 24-48 DNA strand template to create the Interdimensional Free World Councils.

The Elohim acted in a supervisory role of protecting the Taran creation from the monadic spirit plane, while in the soul planes, the Sirian High Council orchestrated the genetic seedings from the second harmonic timelines. As the root races of planet earth were originally seeded into subraces that sourced from 12 Tribes, so it was the same for the first seeding on Tara.

These are the histories of the Sirian Rebellions that generated rifts between the Sirian Annunaki and the Sirian-Elohim’s who based their oversight and decisions to be aligned with the Law of One.

The Guardian Alliance is directed by the Elohim Emerald Order Breneau who support the Guardians incarnated on the earth that are connected to the lineages of the Christos Founder Races.

After the Fall of Tara, the Lyran-Sirian Council, Elohim, Pleiadeans, the Priests of Ur and other concerned citizens in the second harmonic universe contacted the Emerald Order for assistance, and a rescue mission was planned to retrieve the Souls of Tara. This agreement is the reclamation of the Christos Mission that sources directly from the original Paliadorian Covenant that was set into motion millions of years ago. The Paliadorians agreed to be the first line of supporting evolution and reclamation of the Inner Spirit for all humanity, awakening in the first waves of the Ascension plan to help lead the Taran souls on earth back home. [1] 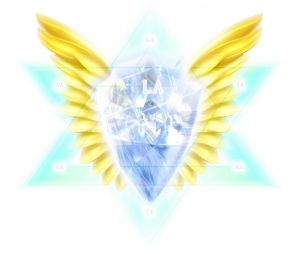 The Cosmic Mother’s White Diamond Flame core is a white tesseract that is found in the Sun-Star shields protected by the White Diamond Elohei and in the center of the aquamarine plasma sound fields, which are emanating from the Cosmic Amoraea shield currents. The Cosmic Amoraea Shield is the Divine Holy Spirit of Mother and Christ Child, made up of the combined flows of Six Emerald Crystal Heart centers existing within each of the layers of the nested time matrices that comprise the pathway through the Stairway to Heaven. The Six Emerald Crystal Heart Pillars further source from the original twelve Reuche Pillars from the God Worlds that generate the Emerald Order Tree of Life.

The Emerald Tree of Life merges into the Cosmic Clock Templar within the newly birthed Emerald Suns, sourced from the core heart spirals of Aquamarine and Emerald Rays flowing from the 1st God World Creation.[2]