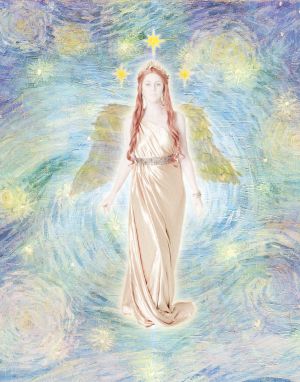 Emerald Rose Rings of many brilliant-colored hues transform into the multiple layers of divine structures that encompass the Emerald Krystal Cathedral, which holds inside its many rooms numerous sacred artifacts of rod and staff, along with emerald and amethyst crystals and pastel opalescent pearls for the spiritual purpose of anointing ceremonies. Inside the Emerald Cathedral are holy tabernacles consecrated with the Emerald Sun template encoded with the Triple Solar Masculine and Triple Solar Feminine Sun-Stars of the Cosmic Christos-Sophia counterparts that are alchemically wed inside the resurrected Triple Suns of the Temple of Solomon. In this sacred space exists the Holiest of the Holies, where the ceiling is the celestial sky of the starry night firmament that is presided over by Cosmic Mother’s portal with the holy spirit flowing into eternal Azothian waters of purity filling the Sacred Grail Chalice levitating above the ceremonial altar. The sacred ceremony of anointing the Triple Solar Goddesses into their organic rose grail codes is performed directly in the eternal light halo with flowing twinned doves of the holy spirit, radiating arcs from the pure crystalline solar rays of the Diamond Crystal Heart of the Cosmic Mother’s White Sun.

Further, Cosmic Motherextends her White Diamond Ankh body which surrounds her Maji Grail Queen daughters with the white wedded Robes of Glory, inscribed with the sacred ancient language of Holy Mother Sophia which emanates divine sound tones of the Cathara, as the music of the spheres that are sung from the crystalline matrix of their bones. The sacred anointing event of the Cosmic Mother’s White Diamond Rose lines and the Cosmic Father’s Pink Diamond Rose lines that unify into the Universal Ruby Red Rose lines for angelic humanity are being memorialized before many witnesses, comprised of an audience of Cosmic Citizens and those from the Interdimensional Free World Councils.

The pure white enrobed Triple Solar Goddesses that are anointed as Solar Dragon Queens are destined to return their identity to this Earth realm in any Solar Ankh Body of their choosing, by singing the core sounds of their original creation song held in their uniquely configured sacred rose heart of the Diamond Sun. The sacred heart songs create the sophianic ray configurations that form into a Solar Ankh body in which its solar rings are enfolded within the soft black halo of the Starry Night Dark Firmament, which then reveals to be their merged particle-antiparticle sacred flame body held within their perfected cosmic Transmigration vehicle.

Thus, those awake may sense the surreal nature of time displacement, bifurcation and strange sensations of deeply dark shadows purging out that are connected to the many changes that are currently happening in the dark matter matrix, with the Cosmic Mother at the helm in the middle world domain directing humanity into merge with the Starry Night Dark Firmament. This is a reconstruction of this time matrix through new creations of celestial heavens dark firmament as well as an updated earthly matter firmament, that are being eternally bonded together through the diamond sun krystal mirror starry night creation. This is moving the group of first wavers of ascending humanity onto the unique consciousness evolution trajectory of newly birthed and newly embodied organic black plasmas, subtle black forces and dark matter that is made anew to be unified with our Cosmic Christos Parents.[1]

For those Starseeds working on the embodiment pieces for the Triple Solar Goddess sacred sophianic awakening on the Earth, as the authentic Cosmic Mother is anointing herMaji Grail Queen daughters, the month of October tends to deliver the maximum intensity with surreal physical ascension symptoms and abruptly jarring bifurcation events. Returning the true sophianic expression of the Triple Solar Female Christ in her Solar Dragon Queen emanation requires nerves of steel while her consciousness is going into the darkest hell realms and back, as the reclamations required for the embodiment process are inexpressible to those who do not know this experience and thus will not understand.

Thus, the natural laws of the Virgo Sun hold the divine transmissions from the Triple Solar Marys and contain the instructions for accessing and obtaining that pure essence via the sacred heart chamber of the Inner Holy Spirit, by distilling its sacred feminine spirit substance into our physical body and then transmitting the intelligence streams as unconditional love from our sacred crystal heart into the earthly matter. The core stardust essence of Virgo constellation is representative of the fertility of the Holy Mother’s womb and her sacred role in loving creation as our Holy Mother, and when the stars align, she becomes pregnant with the holy spirit and divine fire waters through an immaculate conception in order to give birth to the Solar Deity, or the Sun of God.[2]