Mount Kailash from the south

The mountain is located near Lake Manasarovar and Lake Rakshastal, close to the source of some of the longest Asian rivers: the Indus, Sutlej, Brahmaputra, and Karnali also known as Ghaghara (a tributary of the Ganges) in India. Mount Kailash is considered to be sacred in four religions: Hinduism, Bon, Buddhism, and Jainism. 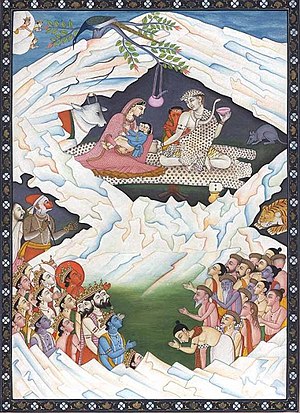 Mount Kailash, depicting the holy family: Shiva and Parvati, cradling Skanda with Ganesha by Shiva's side

In Hinduism, it is traditionally recognized as the abode of Shiva, who resided there along with his consort goddess Parvati and their children, Ganesha and Kartikeya.

In the Uttara Kanda section of the epic Ramayana, it is said that Ravana attempted to uproot the Mount Kailash as retaliation to lord Shiva, who in turn, pressed his right big toe upon the mountain, trapping Ravana in between. This version of lord Shiva is also referred to as Ravananugraha, or favour form to Ravana while seated in mount Kailash.

According to the epic Mahabharata, it is said that the Pandava brothers, along with their wife Draupadi, trekked to the summit of mount Kailash on their path to liberation, as it is considered to be a gateway to Heaven, also known as Swarga Loka.

According to Charles Allen, one description in the Vishnu Purana of the mountain states that its four faces are made of crystal, ruby, gold, and lapis lazuli.It is a pillar of the world and is located at the heart of six mountain ranges symbolizing a lotus.

In Jain tradition the 24th and last Tirthankara, Vardhamana Mahavira was taken to the summit of Meru by Indra shortly after his birth, after putting his mother Queen Trishala into deep slumber. There he was bathed and anointed with precious unctions.

Mount Kailash (Kailasa) is known as Mount Meru in Buddhist texts. It is central to its cosmology, and a major pilgrimage site for some Buddhist traditions.

Vajrayana Buddhists believe that Mount Kailash is the home of the buddha Cakrasaṃvara (also known as Demchok), who represents supreme bliss.

There are numerous sites in the region associated with Padmasambhava, whose tantric practices in holy sites around Tibet are credited with finally establishing Buddhism as the main religion of the country in the 7th–8th century AD.

It is said that Milarepa (c. 1052 – c. 1135), champion of Vajrayana, arrived in Tibet to challenge Naro Bönchung, champion of the Bön religion of Tibet. The two magicians engaged in a terrifying sorcerers' battle, but neither was able to gain a decisive advantage. Finally, it was agreed that whoever could reach the summit of Kailash most rapidly would be the victor. While Naro Bönchung sat on magic drum and soared up the slope, Milarepa's followers were dumbfounded to see him sitting still and meditating. Yet when Naro Bönchung was nearly at the top, Milarepa suddenly moved into action and overtook him by riding on sunlight, thus winning the contest. He did, however, fling a handful of snow on to the top of a nearby mountain, since known as Bönri, bequeathing it to the Bönpo and thereby ensuring continued Bönpo connections with the region.

Bön, a religion native to Tibet, maintain that the entire mystical region and Kailash, which they call the "nine-story Swastika Mountain", is the axis mundi, Tagzig Olmo Lung Ring. [1]