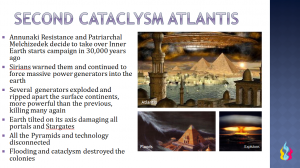 Since the Nephilim Wars the Nibiru Annunaki Resistance and Patriarchal Melchizedek factions decide to take over the Inner Earth and start aggressive campaigns to take over the earth territories 30,000 years ago. The Sirians warned them about the abuse of crystal technology in the earth core and these groups continued to force massive power generators into the earth and Crystal Caverns. Several power generators exploded and ripped apart the surface continents of the earth, more powerful than the previous Cataclysm at the time of the Lemurian Holocaust, killing many humans again.

The planet Earth tilted on its axis which damaged all Planetary Gates, Planetary Grid Networks the portals and Stargates on the planet. All the Pyramids and ET technology disconnected and went offline. Flooding and cataclysm destroyed the Atlantian colonies and much of the earth surface. This timeline is also referred to as the Atlantian Flood. 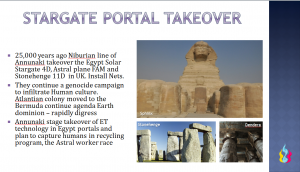 During the time that the Egypt pyramidal technology was rebuilt in the Giza Stargate in that location as the central mission control and ET interstellar port, Sirians and Procyon groups were in high security. The Nibiru Annunaki resistance moved its last Atlantian Colony to the Bermuda area of the 3D Stargate and the Annunaki Resistance continued its conflict over territory and earth dominion through war and genetic alteration of the DNA.

Annunaki and Patriarchal Melchizedek's rapidly digress their race and genetics through becoming a warring species like the Orion Group. The Annunaki plan takeover of all planet ET technology and to capture humans for genetic experiments to create a worker race 28,000 BC, further they negotiate with Orion Group Draconians to share the “spoils of war” of earth takeover. This action is what allowed the Orion Group and Draconians to get a deep foothold into the planet consciousness fields and when severe genetic damage, such as DNA reversal pairs, to the planet and humanity really began.

With the Orion Group now an ally to the Annunaki Nibiru resistance, they organized themselves into what is known as the Intruder races of current times, and these beings are who orchestrate the NWO, and the highest factions of the Illuminati plan for earth takeover. This entails creating a social class system and hierarchy, a Ruling Class and a Slave class on the earth which is the Reptilians Archon ideology.

In 9558 BC the Annunaki wage war over humanity, organize for the One World Order Takeover, Luciferian Covenant on the earth. This is also referred to as the Luciferian Rebellion.

These groups go into the main Egypt Stargate and force EMF pulses into the earth core and Crystal Caverns to destroy the Arc Gates and destroy any communication access beyond the seven Solar planes, which they now controlled through the Egypt Stargate in Giza, the Ley Lines of the Sphinx and GWL network through the frequency fence NET.

This EMF pulse forced a blast so powerful in the earth core that it moved the ocean floor and tectonic plates across the earth globe. It was at this time the Sirian's took all ET technology and Crystals off planet permanently to prevent any further abuse from these warring races. Without the ET and Pyramidal technology to convert incoming frequencies in the Precession of the Equinoxes during the 2012 Ascension Cycle, the planet Earth could explode entirely annihilating the species and genetic material.

With the last explosion of Atlantis the Sirians remove all ET and advanced technology which plummeted humanity into the dark ages 11,500 years ago. See Ages of Humanity. The Morphogenetic Fields and Instruction sets were destroyed and time fields collapsed creating many problems, Astral Plane Soul body distortions and the Negative Ego pathology, such as diseases, Addiction, in the personal identity were the result. The Planetary Gates and 4D Giza Stargate that led into the Soalr body of our Sun, as well as the Earth portal to 8D Galactic center was damaged. No one could get in or out of this Universe. Guardians from the next Universe had to intervene with the earth directly and incarnate on the planet to help avert future annihilation, such as the Astral Plane collapse. Frequency Fences around 3D Solar System and Galactic quarantine was placed on earth which disconnected all humanity from all higher stellar and Guardian communication in 9550 BC.

Some representatives from other Universes tried to incarnate and help the planet earth recover from the damage and liberate the earth inhabitants from their oppressors. Some of those representatives were Akhenaton, and Jesus Yeshua Christ and his wife Mary Sophia. The Krystal Star was aware not much could happen until the Galactic Center aligned with the earth and Sun which opened the Universal Core into the Neutron Window, an opening into multiple Omniversal Cores simultaneously. This is the end of the Ascension Cycle which allowed the Reclamation of Christ and Krystal Star to return to this planet to help humanity be rehabilitated into the GSF Ascension timelines of the future.

During the Atlantian Cataclysm and what is known as the Luciferian Rebellion about 26,000-30,000 years ago, this is when the planetary star gates, the planetary grids became controlled by the NAA Controlling races such as the Reptilians, the Annunaki, the Draconians. And this grid became, during this time, under the control of these beings who used these grids for reversed purposes from their original design and intent for DNA assemble and progression of the human race DNA Synthesis. Not using this from a judgment base but understanding that this last 26,000 year cycle, has been a cycle of a dark age of human evolution and, as a part of the plan here of coming into the seeds of darkness in order to return to the age of enlightenment. I’m sure to a certain degree all of this has been orchestrated as a part of the experiential God-beingness we are through having these experiences and through this human experiment, through Ascension, this last cycle has been that of a dark age. And, primarily the star gates, portal systems and grid systems have been under the control of the Annunaki Nibiru beings and the Draconian beings.

During the last Atlantian Cataclysm cycle the Dracs sought out revenge and went to the Lemurian continent to finish out the genocidal massacres in Kauai 22,000 years ago, to kill off all the Lemurian Race Matriarchal influence and Essenes, Christos Templars influence on the earth. This was to prepare for a completely patriarchal society on earth as run by the Nibiruans and the Orion Group. They took some of the women for their forced Breeding Programs. This was the final genocide of the Lemurians, the matriarchal lineage, that was aided by the Annunaki negotiations and agreements, and the last stage of the Lemurian Holocaust. [1]

The old energy purging on planet could be described as the "patriarchal exorcism" of the False King of Tyranny, and this theme would be synonymous with the events that have transpired from the choices made since the Atlantian Timelines that split the brotherhoods of humankind. If we follow that timeline, the Atlantian Cataclysms is where we had a catclysmic shift in consciousness that propelled humanity into a fallen state, the descension spiral and break between the Universal knowledge and the level of multidimensional consciousness. Humanity and other races along with us, became fully lost in the duality and separation consciousness with an Negative Ego filter. The Ego Filters were Mind Controled by the NAA (intruder races) to control the planetary mind through the patriarchal dominion, greed, warring culture, along with culling genetic preferences made through DNA manipulation.

The Atlantian brotherhood conflict is still playing out its karmic patterns in the contemporary world at this time. There are multidimensional levels, pinnacles of conflicts in the middle east, Iran Gate that are fighting over energies and control in ancient inter-dimensional portal gateways going back to the Lyran Wars.

These gateways (or Stargates) were dormant and have not been activated in our recent history; these matrices are forming in accordance to the ascending planetary quantum mechanics of which as a result, these ancient portals are being reconnected or becoming more active. As these Planetary Gates open access into other dimensions of time and space, as this is happening on earth now, most humans still remain asleep to these events, and as such there are massive conflicts of power (wars, bloodshed, etc) over who is working with accessing those Stargates and commanding those energies. [2]

Over many millions of years, two distinctly opposing seed cultures emerged as infected by the AI programming of the neighboring Bourgha, the Victim-Victimizer software, which was designed to amplify extreme forces of polarity that were particularly effective for harvesting Loosh energy. The Law of Polarity was governed by the Gemini constellation, which down stepped mental body creations that were being generated from the AI mutations forming to reverse polarity signatures. Mutations started to form in which one group of Tarans started to be genetically slanted towards more aggression, domination over others and Service to Self. This group formed into what eventually played out as the Atlantians, a patriarchal dominating culture that was very mentalized and scientific. The other culture was much more passive, spiritual and willing to capitulate through Service to Others. This group formed into what eventually played out as the Lemurians, a matriarchal culture that was very balanced with nature and was following the Law of One.[3]

When the planet earth was slowly invaded through a series of Historical Timeline Trigger Events, the victors of the last war were not human beings. Thus, the NAA was able to freely access the energy quanta of earth and her inhabitants without resistance, because awareness of this fact was methodically erased from historical references and the information suppressed from earth humans. Effectively, this produced anti-human control and mass consciousness enslavement on the earth. The incarnating earth human was no longer able to naturally access the intelligent consciousness of his own spiritual body, without employing sophisticated esoteric practices that necessitated long term efforts for rebuilding the consciousness. The techniques for building the lightbody were taught in the Atlantian Mystery Schools of various lineages and this information was a tightly held secret, only given to the sequestered monks, elite or the ruling classes.[4]

Atlantian Holocaust is listed in the HGS Manual under the Fragments clearing under Fragment Influences (RRO) Historical Timeline Trigger Events. [5]

Atlantian Flood is listed in the HGS Manual under the Fragments clearing under Fragment Influences (RRO) Historical Timeline Trigger Events. [6]