Nibiru is the Sumerian version of the same planetary body also called Marduk by the ancient Babylonians. Nibiru or Marduk was forced into an extreme elliptical orbit of approximately 3600 years, and is known today as the twelfth planet in our third dimensional Solar System. Nibiru has not been discovered by Earth mainstream science. It is under the control of the NAA and it functions on reverse orbit and reverse Merkaba alignment.

Original planet of the Annunaki.

Wormwood refers to the Niburian Anunnaki’s artificially created battlestar that exists on the counter orbit to the Nibiru planet in our solar system. The alien architecture leeches onto the former body parts of exploded Tiamat which exists as phantom body and is the Phantom Matrix wormhole of Tiamat. The Nibiru Battlestar was formed from the exploded parts of Maldek.

Since the Luciferian Rebellion, the Fallen Angelic Annunaki factions that are sympathetic to the Nibiruian Agendas implanted alien machinery in the earth to set up reversal current networks that artificially forced the lowest density of the 3rd dimensional plane into misalignment with Nibiru. The Alien Machinery was used to force the planet earth to run reversal currents into the planetary grid networks, which forced an unnatural reversal merkaba spin that greatly increased matter densification. The artificial reversals running in the planetary merkaba field forced the individual inner merkaba spin to run reversals, which resulted in Gender Reversals and extensive DNA mutations in the original human body blueprint. This effectively damaged the process of spiritual Ascension, gender unification and the potential for 12 strand DNA activation, which was required for full ascension and passage through the Stargate system.[1]

The NET (Nibiru Electrostatic Transduction Field)[1] was anchored into Earth using the NDC and Nibiru Crystal Temple Network during the Luciferian Rebellion, 25,500 BC. By impinging scalar sonic pulses at the Earth's inner grid system an 'interference' pattern or electrostatic force-field was created, enshrouding the Earth. This NET has the effect of buffering (stopping) incoming and outgoing signals, in particular to the higher dimensions (Guardian Founder Races ETs, etc.), creating a kind of quarantine. 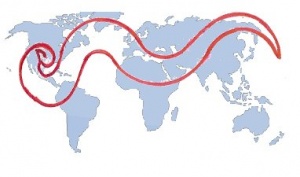 The Serpent APIN was also created during this period by the Pleiadian-Nibiruian Anunnaki. This APIN runs on D 4-5-11 reverse current and connects to Phantom Nibiru and other planets via the Phoenix wormhole in the Bermuda Triangle. It uses spike-site implant technology and links with the NDC (see below) and Giza, etc. Recent activation began around the 1700s.[2]

Marduk aka Nibiru was involved with the deliberate destruction of the planets Tiamat and Maldek.(see Tara).

Without Tiamat we were unable to have our 10th Chakra and all its functions work in our bodies, as she was the frequency link to communicate with our Christos Avatar self. The 10th Chakra has lines around our Left side and its main portal is a network from behind the left ear, to the crown and to the Soul Star directly above our crown, about 6 to 8 inches above our head. The destruction of Tiamat (like a heaven and earth principle living together in perfect harmony) is synonymous with the destruction of sacred marriage (union of opposites), the destruction of the Hieros Gamos, thus splitting apart the consciousness of the Christos-Sophia. This also manifested the split in the wall in time, and the shift to patriarchal domination and/its electron distortion that was exploited by the False King of Tyranny and the Imposter Spirit. The shift to patriarchy domination was inevitable and planned through the last cycle by the Alpha Draconis/Orion Group, however the levels of destruction nearly took creation to annihilation.