Those of us who can stay awake, alert and connected to the truth spirit and God self during the current Plasma Activations and planetary Dark Night of the Soul, are able to anchor into their Lightbody the organic krystal directions which are the correct positions within future time and space. This organic alignment allows us to stay in the eternal moment of now presence while simultaneously travelling forward towards our true north position, which is the consciousness evolution towards spiritual ascension. As the Collective Consciousness voyages into the egoic death passage to discover the spiritual process of consciousness rebirth, the trajectory takes us to explore the past darkness in order to shed the dead energy of previous trauma. We clear our past pain in order to expand into the garments of light which hold the plasma spiritual body record, which builds the plasma ascension vehicle for our highest consciousness. 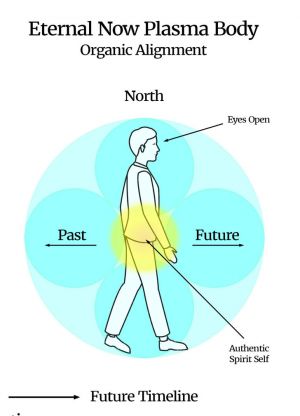 From within this eternal moment, we are synchronized into now from all of the past timelines, organic and inorganic, which merge into the one future organic timeline that unites us in truth. Where the promised future of spiritual freedom is made available to all human beings, during some point in their consciousness journey, when they too will embody an ascending identity to merge into the one future of the organic ascension timeline.

As the plasma activations transmit levels of plasma body activation coding, this allows us to visually sense or see more of the alien architecture embeds or strange harness implants within our own bodily system, in which we continually peel off and clear through the layers. The return of the Solar Rishi is changing the experience of perceiving alien machinery in multiple stations of reality, where there appears to be the physicalization of the AI technology server systems or random alien cube machinery components which make the reversal current networks much more visible from this realm.

The Rha Solar Consciousness factors of spiritualizing Paliadorian-Starseed krystal rainbow blood codes are being transmitted from the Rha God World Creation through the liquid plasma sheath flowering nerval system which is rapidly upgrading in our vertical channel and crown energy centers, forming the corrected coordinate directions to the star map constellation points from within the Maji Grail Crown.

As krystal plasma air elements and krystal vapors begin to spiritualize the cellular waters and fluids in the physical human body, then it may become visible to notice that the human race has been blocked with artificial black goo and black gel rings forming around the vertebrae and spinal column which have been used to enforce the Death Seal and consciousness lockdown through cycling AI net frequencies. The spinal column encloses the spinal cord and the fluid surrounding the spinal cord. We note that dark matter template correction along with mother’s sound tones from the new harmonic universe begin to circulate a series of holy spiritual vapor waters that flood into the kidneys, the cells, the cerebral spinal fluid, and the interstitial fluids to upgrade the entire water management system. The plasma activations can generate stages of excessive dryness and thirst, where replenishing the hydration of the cells and cellular bio-chemic salts are required.

From the Guardian Perspective, this plasma activation is a sequence level in the fulfillment of the Paliadorian Covenant which is initiating plasma sheath bodies, advanced chakra flowering systems, sextant matrix shifts, krystal atomic body and atomic regulator shifts, which greatly reconfigure the solar plexus and 3D Conscious Mind matrix. This in turn begins the build out of the plasma luminary body which stations our authentic spiritual identity in eternal now presence, all time is spherical and accessible from this eternal now. This can greatly impact our perception of time and may lend to the sensation that we can bounce in and out of time, sense moments when time feels faster or slower, and then have sensations that we are experiencing a void space in no-time.[1]

The increased solarization of the planetary grid network is occurring rapidly in the stellar grid areas where the Sun-Stars are being reconnected into multiple layers of crystalline grids and diamond diagonal grid networks that power up the master controller grids in the Albion. As there is a reconnection of the Sun-Star Stellar maps into sections of the crystalline grids on the Earth, this is beginning to build higher liquid plasmic ray frequencies to the level that the planetary magnetic field is exponentially weakening. The magnetic field is shifting to the extent that the gravitational pull is lessening which causes the collapse of alien frequency fences and assorted controller machinery, which begins the transfiguration of the raw substances in physical matter and mental body matrices. As changes in the magnetic field occur, this can impact the electromagnetic balance between the left hand and right hand positioning in the body. The lightbody adjusts itself to the organic alignment of correct left and right positioning towards the true north star leading into the future timeline.

The solar streams in the form of solar winds enter the Magnetosphere which is located in the ultraviolet layer of the Ionosphere and directly control the planet’s internal magnetic field, which is currently being reconfigured into organic states of magnetism.[2]