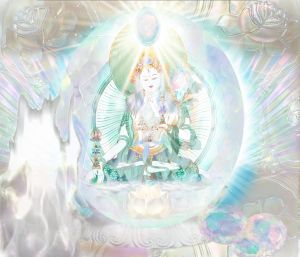 Through the many twists and turns of challenging processes this year [2022], finally the authentic divine mother counterpart to the Universal Melchizedek Logos of our time matrix was revealed and confirmed by her presence and direct communications in the stargate systems multiple times. The Universal Mother eternal spirit body counterpart of the Melchizedek Logos in his Maharaji Blue Crystal Human form, is his beloved sacred Cosmic Twin Elaysa-Melchizedek. Our Universal Melchizedek Mother is the source field of the Cosmic Elaysa Sun, as she joins with her divine husband in her Maharaji White Diamond Crystal body that holds the eternal opalescent rainbow flame that is the Staff of Elaysa.

Cosmic Mother would generally appear in her rainbow dragon form when she was coming to announce herself and would communicate through the twinkling Bethlehem Star of White Solar Fire or an undulating tri-wave current of the Opalescent Flames, which later was understood to be of the Elaysa Sun. Recently, she chose to reveal her Universal Mother form as Elaysa-Melchizedek, the divine mother Sophia counterpart to the Melchizedek Logos. From out of the Tibetan fields of 9D, Elaysa-Melchizedek appears similar to a giant White Taran Asian Goddess, in her right extended palm she holds the Triple Female Tara’s entire spirit body, and in her left extended palm she holds the Triple Male Buddha’s entire light body, in perfect energetic balance. She is surrounded in multiple layers of glowing solar dragon gel rings and massive shimmering opalescent arcing rays extending into the heart of Elaysa Sun, that make up the layers of the Cosmic Ankh Body.

The return of Elaysa has ripple effects into the Cosmic Clock and assorted timekeeper mechanisms, whereby the center point access in the 8D layers were greatly impacted in the Asian grids of the planet, which brought on subsequent shifts in the southern position of the Four Royal Stars with Fomalhaut in Piscis Austrinus. Elaysa appears to be gaining control of her spiritual body functions of the south pillars connected to the 6 o’ clock position on the Cosmic Clock Reuche Pillars. This correction appeared to ripple impacts in the timelines and land mass of China, forcing purges of assorted Black Dragon and lunar hierarchies and their AI technological systems running assorted mind control weapons. Some related to the assorted terror agendas of the history of the Communist reign of human torture and genocide, and some to the current usage of its tyrannical methods to incite terror and compliance through ongoing pestilence programming.

Elaysa-Melchizedek’s return to this world highlights very intense oceanic waves of unique spiritual activations, clearings, initiations and assorted returns of body parts and consciousness memories that are connected to the entire Melchizedek spiritual family. This is especially fraught with heavy physical ascension symptoms for the Solar Female Melchizedek lines, those Starseed females with a mission to work on the solar feminine spiritual healing and integration process, in order to transmute the lunar overlays and sexual misery programs. The lunar female forces tend to unconsciously be manipulated to despise the solar female, and so it can be a painful and isolating event when a so-called spiritual female turns on another, as that initiated female is being powerfully activated into solar templating. Thus, to undergo the spiritual restoration process, some of us will be exposed to some of the painful memories of the Fallen Melchizedeks, and begin to remember and feel the solar female persecution timelines and witch hunts. Lifetimes in which painful patriarchal domination and misogyny came about when we were incarnated on the planet, without the protection of our Universal Mother, our beloved Elaysa.[1]

Through the dramatic adventures over the past few years with the reclamation of the Triple Taras, it was only recently understood that the Triple Tara’s are massive spiritual bodies in the Earth-Tara-Gaia matrix which hold the entire dark matter template, Rasha matrix and eternal light body sourced from the Cosmic Mother Sun, Elaysa. For ascension, we need the eukachristic activation of the Rasha Body (dark matter female principle) to synthesize and integrate the physical layers of our body with the light body layers. Once the physical layers have integrated enough light quotient into embodiment, it is the quality and measurement of light in the lightbody that magnetizes and attracts the eternal spirit body into the physical form. The Triple Tara’s of Universal Mother Elaysa Melchizedek are what perform this unifying function for the planetary body that exists in the Earth-Taran-Gaian matrices. Thus, they needed to be freed from their enslavement, cloning and inversion by the NAA invader’s AI machinery before they could fully unite again and be reconnected with the Cosmic Mother Elaysa Sun.

During the end of the Cosmic Cycle, the hidden eighth sun appears and the Cosmic Aton body assembles through the integrated merge that occurs between the Seven Suns of the One. The Seven Suns of the particle matrix merge with the Seven Suns of the anti-particle matrix forming the completion of the cosmic time cycle, that further forms into the Aton Body on the eighth day which marks the end of the cosmic cycle. The Seven Suns on each side of the material and spirit domains unify and show the position on the Cosmic Clock of the Aeons as the right hand at 10 or 22 hours, and the left hand on 4 or 20 minutes. These positions can be thought of as 10:22, 10:4 or 10:20, which marks the dual time matrix merge that ends the current time cycle and aligns us into zero-point time in the creation door or neutron window.

Through the Aton body which functions as the Cosmic Christos Solar Dragon body unifier of the Seven Suns into One, the Cosmic Krystal Cathedral architecture and spirit instruction sets played in heavenly orchestras from the God Worlds emerge. It is through the Cosmic Krystal Cathedral, which serves as the heavenly vessel for the massive spiritual consciousness body of the Cosmic Mother, that she embodies within and without, internal and external to eternal life. It is a travelling consciousness vehicle that links the stairway to heaven spiritual planes with the material planes of the Earth, and it is the repository for her instruction sets and musical designs for building out the entire Cosmic to Universal to Planetary Krystal Cathedral network for the planet.

This year’s newsletters [2022] have been revealing the major planetary grid events unfolding the gradual stages of the Cosmic Dragon Awakening and reunification of the Triple Solar Masculine and Triple Solar Feminine Rishi-Reisha in their hierogamic Emerald Sun template. These stages progressed through the ongoing retrievals which encompass many moving parts, that when reunited form into the eternal spiritual body for the Cosmic Christos Solar Dragons. These are the Cosmic Christos Emerald Founders, the Ancient Builder Races who originally built the creator source code and instructions sets for the entire Universal Time Matrix. This Cosmic Christos Sun family announces the end of the Cosmic Day evolution journey through the Universal Ascension Cycle, in which consciousness expansion into lower dimensions comes to a full stop. As the mass consciousness expansion comes to an end, we have completed the rounds of the twelve Astrological Ages, when all consciousness begins its return via a new spiritual journey back home through the Center of the Creation doorway. See Cosmic Dragon Awakening.