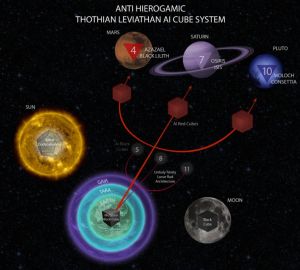 Transcript: The black dragon trident false rod and staff architecture for the Anti-Christ male and female principle run reverse rod lunar rods through a Black Cube metatronic cube in the centre of the Earth. This is the driver for all black cubes in planetary grid and the most prominent is black cube matrix in Mecca. In the Middle Eastern area there are powerful Stargates, they hijack the religion of Islam in order to get the Loosh energy to power up this black cube device which is connected to the feedlines of this entire anti-Christ structure. See Red Trident.

The energetic imbalance between the electron and proton spin rates was being harnessed by Controllers through hijacked creation code and inorganic architecture, one such structure known as the Vesica Pisces a bi-polar geometry used to generate Reversal Networks. The hijacked Vesica Pisces code kept the binary code (consciousness polarity split through separation and distortion) locked down in our planet so that the Trinity Wave and unity code would not be accessible. Effectively, over time this produced Gender Reversal problems in the human lightbody, preventing and destroying sacred union between the male and female principle, and the machinery used to accomplish this is referred to as Anti-HG Technology.

This forced reversal and split patterns that continually fragmented our consciousness at multiple dimensions. It also was creating Monadic Reversal patterns which split us up from reuniting with our Monadic or Twin Consciousness Matrix. This machinery intends Gender Reversal or Gender Splitting in humanity, and this is related to the NRG in the UK and the Sexual Misery programs inserted to genetically alter the human race.[1]

Spiritual couplings and Genetic Equals that came to the earth to fulfill the Christos Mission of Sacred Marriage or Hierogamic Union, are known to be directly targeted by the Anti-HG Technology, in order to manipulate or destroy the relationship and derail the collaborative mission. This can prove to be very confusing and even emotionally devastating for many spiritual couples that are on the Ascension path and are consciously working towards achieving sacred union or hierogamic union between their male and female counterparts. Anti-HG Technology directs the archetypal forces of the Demon Seed of the anti-Christ, in the form of Azazael and Black Lilith, which are the Satanic Force Counterparts.

Those of us that are embodying hierogamic union or sacred marriage have been under extremely aggressive black magic attacks and electronic harassment, as well as extreme dark interference during the Megiddo Battle. The Black Dragon Avatar Collectives have made their presence known and have been using ambush strategies, as well as every tactic of divide and conquer to generate as much pain and suffering as they can. October is a highly active month for satanic holidays and Blood Sacrifice, and combined with the forces of chaos being generated by outer rioting this has fueled black magicians and assorted satanic and shadow forces into high gear.

Anti-HG Technology directs the archetypal forces of the Demon Seed of the antichrist, in the form of Azazael and Black Lilith, which are the Satanic force Counterparts manipulated by the Black Dragon Avatar Collectives from Wesa. These entities are not happy we have succeeded in dismantling many of the feedlines and Reversal Networks that supported mind control sorcery and unlimited energy supply to their human representatives, and thus have been retaliating towards many of us that are a part of the Guardian ground crew.[2]

Reference from Historical Timeline Trigger Events: 25 YA, Produce anti-hierogamic spawn in Peru Stargate to destroy Genetic Equal and Twin Flame Sacred Unions during the Ascension, and put AI reversals and Clones in its place. This is known as the Alien Love Bite.[3]

Additionally, the Red Cube AI technology is designed to be a genetic code crasher for anti-hierogamic union or to create interference through an Alien Love Bite scenario that engages that person in heavy emotional dramas via Victim-Victimizer archetypes and mistaken identity, by keeping the inner and outer gender principles split apart. The Red Cube technology capitalizes on painful emotional astral damage and mistaken identity, confusing identities, so that the target cannot tell who is who, what are the false timelines and imposters versus the authentic identity. The targeted person can mistake AI Digital Twins inserted into their hologram as their twin soul, or whatever else that can be included to interfere with integrated spiritual Ascension by confusing them with mistaken identity or Hero-Savior archetypes. This includes the target believing that they are this special identity from an inserted digital twin of a cloned Ascended Master in their lightbody, in which this clone runs AI red wave, false feminine violet programming or other artificial frequencies, which is quite common in the new age circles without Negative Ego training and Victim-Victimizer clearing.[4] 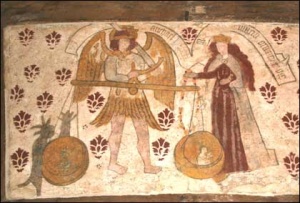 Ultimately the Sextant Matrix function is to unify the internal polarity of energies through merging the gender centers and like an opening an umbrella, create the field burst which extends outward the merkaba field layer. The sextant matrix has been targeted by the NRG Gender Splitter technologies, and is a part of complex systems in which there are intended repair projects for the NRG related gender and sexual damage that is in the human physical body and Lightbody. Until we can heal Metatronic Reversal in the Monadic body, the Sextant Matrix clock harms our biological functioning, increases Aging Disease and is the reason we physically die. More research on this matrix is required.

The Metatronic code is based on two spheres of Bi-Wave Influences of the Vesica Pisces instead of the eternal life three spheres, or Trinity Wave.Fallen Consciousness, such as the Fallen Angelics and Imposter Spirits, are due to Metatronic Code configuration in the planet and is the result of excessive misuse of free will choice that opposes the divine plan and intention of God Source. In the cycles of evolution, the opposing expression reaches the point at which it jeopardizes the Eternal Life expression and continued existence of the Cosmic Order.

Metatronic Reversal means to digress from the original Christos Divine Blueprint of the 12 Tree Grid and manifest Anti-Christ or Anti-HG life forms. When the original creation program of the Krystal Code from God Source is altered or modified in any way, the ability to self-regenerate and ascend is interrupted, leading to Fallen Consciousness and potential destruction.

Due to the DNA damage our species suffered after the Fall of Tara, the 4D astral body that made up our heart center was fractured, and the lower portion of the soul matrix astral layer became inverted upon itself and became lodged in our 2D sacral center. These schisms in the lightbody layers also greatly contributed to the production of Shadow Selves, shadow personality alters, shadow elementals and fragments in the Soul matrix, which further proliferated personal Miasma and Planetary Miasma.

When the astral layers were split into 2D aspects and 4D aspects, this generated a dual identity and this was how the first Shadow Self and its unconscious aspects in the Pain Body were generated. The 2D schism split the instinctual body layers into separate functions, a collection of fragmented sub-personalities that were generated from soul memories and a repository of personal emotional energies and the collective forces of chaos lodged in the planetary 2D layers. This lower astral distortion tends to be exploited with anti-hierogamic targeting technologies for inserting alien love bite scenarios, where an individual feels inappropriately bonded to another individual at the sexual (2D) or heart (4D) level, which is very confusing and emotionally disturbing. To begin to heal from Alien Love Bite and Anti-Hierogamic Technology targeting, this section of the astral layers and soul matrix must undergo Emotional Healing, which will release the inorganic bindings.

Because most of us are not aware of this distortion existing in our astral layers, the NAA forces have used many tricks to continually confuse us through the use of alien implants and attaching negative form shadow bodies through Alien Love Bite or other dark manipulations. The negative form is a series of artificial dead light or AI projected shadow bodies that are used to recreate negative timelines or to steal our genetic material and consciousness energy through many methods of dark astral manipulation. The damage from the 2D-4D schism generated a weakness in our lightbody for the NAA to exploit, hijacking unintegrated shadow aspects or soul memories and then attaching false memories, false identities or Clones through which our consciousness could be manipulated or misled. That is why this unhealed Lightbody damage is commonly exploited for alien love bite situations, as many people can be easily manipulated in their emotional layers to play out unhealthy behaviors in the twin flame new age mind set. The negative form is a duplicate Shadow Self that is attached to the soul layers like nesting dolls that are made in our genetic image. Sometimes they connect these images to other people that they are attempting to confuse and derail in their Ascension progress. These are designed to spin out interference, artificial realities and Alien Love Bite scenarios where the NAA attempts to fully control the future timeline of that person, by derailing them or placing superimposed miasmatic interference in their field for the purpose of ongoing technological sabotage of that Awakening person.[5]