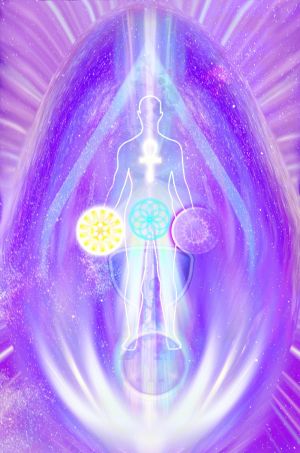 The Dark Matter Template is the Blueprint on which the eternal source particle atoms and molecules are built, in order to generate the layers of eternal light. This is actually a type of matter body that is fully merged with eternal spirit substance.

Our time matrix, our reality is evolving. It’s changing quickly and transforming now and this radically changes the structures and matter. I believe it is for this reason, the change in matter, which is changing our bodies and is the theme of this month's newsletter Adaptations is that we are to bring into our awareness the Dark Matter Template Body that is a part of our own consciousness body so that we become aware of and know we have this body.

When the Guardian Host brought forth in January that this year would begin genetic mutations for the human race and now nine months later in September the theme is Adaptations these two themes are directly related to the shifts occurring that are affecting our physical body and physicality as well as our orientation in matter, in time and space. The template that is affecting these changes in our physical body structure is at its source the Dark Matter Template Body. Just keep that gently in your awareness so that you become more aware of this part of your self, the Rasha Body.

Again the planet has completed its Magnetic Peak cycle. This discharged massive amounts of magnetic force into the earth. As a result many changes in the Subatomic Particles of elemental matter are rearranging to support the planetary body shift into the next Harmonic Universe. All communication systems that connect with these levels of the planetary light body structure, the core manifestation body, are undergoing fluctuation, reconfiguration and rebuilding interstellar links that reconnect Earth portals to realign into multiple star systems and celestial bodies.

Now what this says to me is - understanding Holographic Geography - as many of us know our planet has been put on a false 23° wobble in order to disconnect all of the various vortices and power grids that we can see the remnants of in megalithic structures. These structures were originally connecting holographic geography, levels of geometric intelligence that were connecting the star systems and celestial bodies in our local universe into the surface grid of our planet. As many of us are well aware, that complex system of holographic geography has been disrupted. So this is telling us, as we move into the next Harmonic Universe, there are new communication systems coming online to help realign these dormant Earth portals, these megalithic structures, some on the surface of the earth grid that are visible and some which are not visible to us. They are either underground or obfuscated in certain ways by those entities attempting to maintain control over them.

This is occurring as a massive shift at the quantum scale is changing the Law of Structure in our planet and in the architecture specifically that governs function over our matter body as well as our consciousness bodies. So here's another clear reference being made to the Dark Matter Template Body or Rasha body function with our eternal spirit consciousness. It is this area that governs function over our matter body and links between the consciousness bodies into the eternal spirit.

The quantum field also referred to as inner space time is rippling these effects into the un-manifested layers of the core manifestation template (there’s that 12 Tree Grid again) otherwise known as the blueprint matrices that make up the layers of the Morphogenetic Fields in the Earth. When you hear morphogenetic just think instruction sets, the instruction sets for Consciousness. The blueprint alterations impact the Dark Matter Template. Okay, so big clue here! This is saying that as the Core Manifestation Body, the 12 Tree Grid is undergoing alteration, this is impacting the Dark Matter Body and this appears now to have direct consequences to altering and changing Earth Elements and the elemental structure of the Earth body because just as we have a Dark Matter Template, so does Earth. So it is the preceding statement that leads us again to recognize the importance of our Dark Matter Template, the Rasha Body now, while these shifts are occurring. "[1]

Since last August during a massive magnetic force discharge, the Dark Matter Body of the earth has been activated to function outside of the black hole technology suppression. It has begun to generate more pranic life force that is building new light body sheaths for the earth body. As a result there are many changes happening as the Subatomic Particles of elemental matter are rearranging to support the planetary body shift into the next Harmonic Universe. All communication systems that connect with these levels of the planetary light body structure, such as the Core Manifestation Body are undergoing fluctuation, reconfiguration and rebuilding interstellar links that reconnect earth portals to realign into multiple star systems and celestial bodies. The holographic geography is shifting, along with the false 23° tilt that disconnected various energy vortices and power grids in the planet’s megalithic structures.

As we move into the next Harmonic Universe, there are new communication systems coming online to help realign dormant Earth portals, such as connecting these megalithic structures. Some of them are visible on the surface of the earth grid and there are many that are not visible. This is occurring as a massive shift at the quantum scale is changing the Law of Structure in our planet, specifically in the architecture that governs function over our matter body, as well as our consciousness bodies. The Dark Matter Template Body or Rasha body is this area that governs function over our matter body, merging with the eternal source layers of our higher consciousness bodies.

The Dark Matter Template is the Blueprint on which the eternal source particle atoms and molecules are built, in order to generate the layers of eternal light. This is actually a type of matter body that is fully merged with eternal spirit substance. The dark matter body undergoes a process that appears like full resurrection into light matter, at which point the elemental matter or atomic matter of the body has been resurrected into an eternal light substance body. The state of resurrection that exists as the dark matter body alchemically transforms itself through the intense heat of spiritual fire and bursts into pure light matter, is what defines the building of the eternal Eukachristic spiritual body.

The beloved Aurora flows are very clearly helping to build the earth’s dark matter body layers, with flickering and glittering opalescent rainbow pearl energies being observed as they are weaving through the layers, in a beautiful tapestry of flowing currents. As the planetary body is able to hold these activated dark matter bodies, it is the same for each of us on the earth to have the direct potential to interact with these same Krystal forces. This is a major development for the Guardian Ascension support team that is helping us to build the human dark matter body, that exists as the extension of our lightbody. The dark matter template holds a cell that has the instruction set for the new elemental body, the elemental body that is specific to the matter substance that is connected to the harmonic universe we are evolving towards. The process of building the Rasha body also spiritualizes the blood, through what is called the Krystal Waters, through which the Krystal blood prepares to animate the creation of the Eukachristic Body.

The Krystal Waters are the eternal living waters sprung forth in the first eternal creation, and are to be called upon to soothe and heal the soul and crystal heart and Diamond Sun body. Additionally through these waters, the spiritualized blood of Christos flows from the Fountain of Eternal Life and Youth. Krystal waters support the Aurora project in elemental re-encryption of the bodies, blood chemistry, and in healing the damage of blood toxicity and miasma recorded as reversals in the bloodlines. The dark matter body gives us another level of support to clear and heal bloodline issues, inherited from alien hybridization.[2]

Nanotechnology is the manipulation of matter on an atomic, molecular, and supramolecular scale and for our purposes of discussion, on the quantum levels. Recently the massive influx of Cosmic Rays and intergalactic plasma gases into the earth core and Polar Regions, along with the alien attempt to harvest and collect this new incoming energy source, has revealed the deeper purpose of Black Goo. The massive plasma gas transmissions are shifting the dark matter template in the earth at the elemental level. This is being observed as transforming carbon allotropes that are present in fullerenes or Buckyballs. Carbon allotropes such as fullerenes are solids in normal conditions, but are changing their state of matter into liquids at subatomic scale, from the massive amount of recent plasma gas exposure. A fullerene is a molecule of carbon in the form of a hollow sphere, ellipsoid, tube, and many other shapes. Spherical fullerenes are also called Buckyballs.

The Dark Matter Template is the dark matter instruction set of the planetary body, and it has been filled in certain areas with this Alien sourced Black Goo. It was programmed into the dark matter template of the Albion Body and appears to have had its point of entry into earth around the time of the Nephilim Wars. This "alien black goo", acts as a faux synthetic artificial intelligence elemental that mimics and controls carbon allotropes and how they function in the dodecahedron structures on earth. It is clearly how the Negatives have been accessing carbon elements to control matter forms, including control over genetic expression of the human body. This programmable Alien AI has infected carbon material and is what has taken over the platonic solid Dodecahedron and related pentagonal geometries that build time space constructs. These time space constructs are instruction sets in the morphogenetic field that run into the Ley Lines of the planetary body. This is how they have built artificial realities and false Timelines and projected them into false holograms. The spherical fullerene has something to do with the AI control over carbon-based matter at the molecular level that can control genetic expression.[3]

The Chakras send their processed energy as intelligent spirals into the Nadial Capsule which forms around the manifest biological form. The nadial capsule is comprised of the three-dimensional layers of the harmonic universe, in which the consciousness is stationed as an identity. The Nadial Capsule instructs how the consciousness must organize itself into the manifested DNA and RNA cellular biology. The DNA-RNA in matter sends its intelligent design to the Nadial Structure, which acts as the blueprint for energetic transmission and energetic receivers that form into the blueprint for the physical Brain and nervous system. The central nervous system transmits into the molecular structure and then into the nuclear core in the 1D atomic body, which informs the Dark Matter Template. [4]