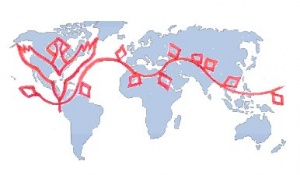 With the Earth’s field weakened by inverted 7D violet current, the Black Sun Omicron Draconian races from Alpha Draconis generated an artificial wormhole on the 7D axiatonal line that connected with the 7D stargate in Lake Titicaca, Peru. This timeline trigger event occurred shortly after the Luciferian Covenant in order to compete with the Belial Groups planetary takeover agenda. This alien wormhole system, also known as the Phoenix and Falcon Wormholes, connected to Phantom Arcturus and was intended to link Omicron-Draconian-Rigelian genetic bonds with the planetary grid network by ripping black holes in the space-time fabric and siphoning the planetary life force to be re-directed into Thuban. This was an extensive system of alien AI machinery that was constructed as a Phantom Matrix for use by the Alpha Draconis-Orion Group network linked with Wesa.[9]