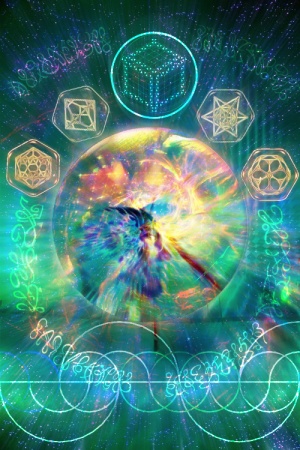 The Sun hides an etheric planetary orb which is an entrance leading to the Cosmic Spiritual Sun or Sun Disc Network, which holds within itself the first principle of the emanation of the Holy Father’s Eternal Light, which is the highest expression of The Solar King or Cosmic Christos Consciousness. The Cosmic Holy Father principle is the Father Arc in the parallel matrix that is the source of the Cosmic Spiritual Sun that gives light to all things in our Universal Time Matrix. The Mother Arc is awakening the Holy Father Arc, this heralds the reappearance of the Cosmic Solar Masculine Christos principle in our Solar System emanating the rays through the Seven Sacred Suns or KA RA YA SA TA AA LA. This new solar activity is changing the masculine principle archetypes through the alteration of the Seven Ray particle structure formed from Ursa Major which began primarily through the reconstitution and rehabilitation of the 7D Violet Ray. This modification happening to correct the Violet Ray distortions, such as the Crucifixion Implants are connected to the corrections happening to the Magnetosphere and the Dark Matter Template functions, thus this directly impacts the elemental particles of matter, making it less dense. This planetary shift is dismantling the False Father masculine archetypes of Mind Control used to propagate False King of Tyranny architecture throughout the Planetary Logos that has been exploited by the NAA to masquerade as False Gods. The planetary mind is to be replaced with the organic consciousness of the Christos mind as directed by the return of the Solar King, or embodied Solar Masculine Christ. This is the beginning of the return of the Holy Father's Rod architecture as it is spoken in Book of the Law. See Cosmic Holy Father Rod Code and the Solar Anointing of Michael.

The awakening Holy Father is illuminating his return as the Spiritual Sun behind the Sun begins the phase of returning masculine archetypal forces of benevolence merged with true power. However, the end of the rule of the Tyrant must be internally and spiritually chosen by the individual on the evolution path. What do we choose, freedom or tyranny? For many on the earth the False Father tyrant archetype has become an negatively rooted addiction of acting out extreme Victim-Victimizer polarity games that may be hard for many people to break free of. The ending of the False Father tyrannical control requires the willingness to take personal spiritual responsibility to end all victim related patterns.

The Cosmic Monad of Father God emanates as the Father Arc, sending transmissions of the next phases of the liquid plasma waves of the Cosmic Christos which are returning now to activate or return the Permanent Seed Atom to those human beings who the Permanent Seed Atom should belong to through plasma Lightbody and Emerald Crystal Heart activations. The Cosmic Monad of Holy Father God merged with his beloved Holy Mother God Wife is Emerald Green or the twinned Emerald Ray and is the spiritual meaning behind the Return of Emerald Order. This Ascension Cycle phase restores energetic balance and begins the process of Return to Rightful Owner to those human beings that have developed their heart and true spiritual consciousness in Love. The Permanent Seed Atom is located in the Higher Heart Chakra center or 8th Chakra of the Monadic layers and is the recorder crystal, the Emerald Crystal, within every human being which holds all consciousness memory in the Universe. If this has been stolen, damaged or abused by another, it will be repaired and returned whole to the rightful owner RRO as one seeks to be a knower of God and truth. The higher heart center is also called the Crystal Lotus Heart, while the reverse condition of a shattered or imploded heart is called an Anubian Black Heart or metatronic heart.[1] 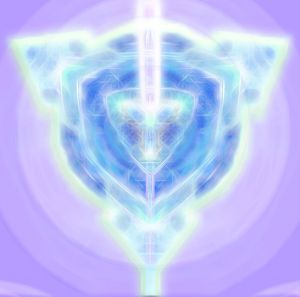 This is one reason the Cosmic Holy Father principle is returning us back to the base issues now, to learn how to cultivate the character building Virtues and ethical principles that we need to strengthen our own spiritual roots. As we become more adept at feeling completely safe with God, we can build trust with the father principle inside ourselves. When we have full trust in our relationship with God, we know we are ultimately protected and we stop generating fear based karmic backlash to ourselves and others. We can stop being victims or bullies. As such, we will find ourselves being sent back to heal the unconscious issues located at the base root in our personal Tree of Life 12 Tree Grid. These are wounds that have kept us weak, stagnant, blind or unable to expand further from beliefs that promote archetypes of victimization or bullying. See Victim-Victimizer.

When we are in right relationship to the masculine principle, we are grounded; stable, and secure with a strong sense of the inner core self. When one has strength at their foundation, one can progressively build upon that foundation which generates self-esteem and self-worth based upon the inner and not the outer. The inner sense of security and stability has nothing to do with the external, this feeling of secure connection is available even if one finds themselves currently homeless or penniless. ( See the Spiritual Nomad Article)

Humanity will not progress beyond self-enforced tyranny or evolve spiritually until the Father principle is healed, grounded and integrated at our base. At this time we are returning to the origin of the root blockage to overcome the damage perpetrated from the mind control of the False King of Tyranny. We must discern the difference between the outer imbalanced False Father archetype that operates as a tyrant and bully in the material world and the Cosmic Holy Father principle whom is the internal aspect of our inner Christos Compassionate Witnessing. In order to recognize what base frequency and belief systems are operating in our spiritual foundation, we must see this "father paradox" working in our consciousness within the inner, outer and in-between worlds.

Finding Base Security with Father 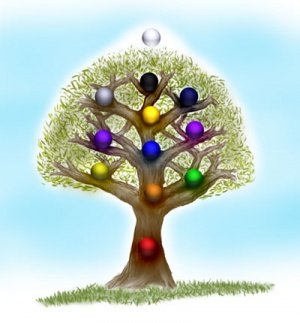 Finding Base Security and Inner Stability: One must make a sincere effort to stop the delusion of basing one's self esteem being made on the appearance or assumption of outer circumstances. For many of us, this is our immediate task at hand, to be mentally and emotionally freed of being bullied, intimidated, and threatened against one's sense of inner security, stability, foundation and wellbeing. We must master this lesson with the Cosmic Holy Father. Father Arc He is embodied here in matter to give us his hand in supporting this truth. It is only the Trinity of which leads us back to the inner One, that is our real security. That relationship is totally up to each of us. Only you can develop trust in that relationship with God, no one can do that for you on the outside.

When we identify what it is stimulating fear into victimhood, we stop giving it power over us. Second, one must leave all false beliefs of security, stability and protection as a measurement made in the material reality. This is the true understanding that money, houses, careers, bank accounts, credit ratings; marriages are not the real sense of one's security. To use any of these items as a life boat to feel secure and stable, is a total delusion of power which is eventually designed to fail. This is to break one's self esteem through continued betrayals of trust and calculated by the False King of Tyranny to create codependence, frailty and apathy. Many humans are learning this lesson in a very painful way during this cycle.

We must learn to identify the difference between the False Father perpetuated by the NAA through the False King of Tyranny archetypal forces and the authentic compassion of the Holy Father Arc in order to find true security, stability and grounded spirituality within us.

Using this chart may be helpful to identify fear thought forms and negative archetypes that have been generated through the False King of Tyranny in your root. Intend and ask Holy Father Arc to bring them into balance with positive thought forms which lead to the unified patterns of balance in sacred marriage.

As an HGS Amplifier (Talisman) as it is defined as Father's Rod of Power – Magenta Wand: Magenta and Gold Founder Ray merged with Mother Arc. Yod of Father God, also Father Arc, is the Living Compassion of the God head, and the Hand of God’s compassion in action, which is activated through our Heavenly Father.

This is a term in the HGS Manual to define the "hand of God in compassionate action to help his children, as a active part of the Father God principle". This is the definition of the Law of Compassion.

The horizontal shields function as the male principle of the mental body for all of the consciousness bodies. The Father Arc and Solomon Shield are inherently apart of healing the False King of Tyranny male principle which manifests within the Root Chakra on the earth. When the five shields built upon the dimensional triads are integrated into the consciousness and Lightbody layers, the higher spiritual Rod function of the lightbody is activated. This is the activation of higher intelligence mental bodies that connect into the dimensions they are built upon. These are called the Horizontal Triad Bodies[3]

Once the Kundalini current runs in corrected patterns to build the subharmonc strings in each of the 3-6-9 dimensions, the actual structure of the Horizontal Triad Bodies can begin to build higher Masculine principle mental bodies and merge into their Trinitized Form. The corrected male mental body patterns rebuilt in each of these higher mind matrices, is also leading to Metatronic repair which is a Nephilim 9D body correction.When these three harmonic triads are corrected throughout the Horizontal Triad Bodies the Lightbody structure known as the Masculine Rod starts to initiate and activate in the Lightbody.