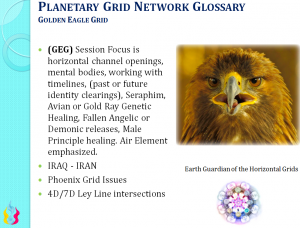 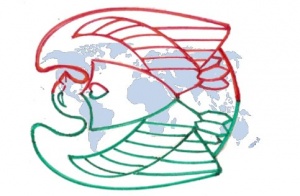 The Golden Eagle Grid was taken over and named the White Eagle and combined with the Jehovian Grids. [3]

Sadly, the Archangel Michael Matrix is a mind control broadcast and biological weapon used to track and hunt spiritually awakening Indigos, which is designed to transmit artificial frequencies that reverse the fire letters so that the Christos DNA template is distorted.

This area is the most prominent to institute False Michael sightings and broadcast usurped channeling into the Golden Eagle Grid Network. It also has circulatory system linked to Giza at the 4D Astral Plane gate level and others.

The Golden Eagle Grid is the Seraphim Gold Ray Guardian of the horizonal timelines, and this is a multidimensional planetary grid network that is comprised of collective consciousness and living entities that make up the earth fields. The Golden Eagle Grid is literally the projected collective consciousness that contains the spiritual bloodline records of the angelic Seraphim genetic lines, and this includes all of the Family of Michael histories on and off planet.

The Family of Michael, and those that have avian genetics and Seraphim memories, are the consciousness which connects into the Golden Eagle Grid. This is also related to understanding the purpose of Grailkeepers, these are soul groups that have been involved in the hidden galactic histories and are spiritually committed to protect the earth, as they are the true guardians of the earth. The masculine principle and those that hold the Rod of the earth, are connected to these Maji Grail lines because this is protecting the internal access points, the inner worlds. The access into the inner worlds was the original role of the gatekeepers, to protect the access into the grail points that are in the earth. The damage on the Golden Eagle Grid is related to the Seraphim group consciousness bodies that became inverted or reversed upon themselves, as a result of these alien machines that used AI to gain access to the 3-6-9 Arc Portal passages, and spawned Fallen Angelic Seraphim.

The Seraphim Gold Ray Founder races led by the Solar Christ-Michael gave their bloodline records, their diamond sun genetics, their collective consciousness to support the earth, to help reclaim the original 12 strand DNA of the human being that was lost during the Fall of Tara. During the seventh cycle culminating now, the embodiment process was to bring in all of the aspects of the Cosmic Christ consciousness, directly through Christ Michael’s incarnation process, and to fully embody the entirety of the Diamond Sun Gold Ray body, in which the entire Fallen Seraphim genetics could be resurrected.

The heart of the Golden Eagle Grid holds an important global control access, which is in the Iran Gate or the 10th dimensional Stargate. In order to maintain the entire global network of base 10 mechanics that run the Artificial Tree of Life projections, thus running reversal 10 current into the horizontal ley lines, the NAA must maintain control over this demographic area, as well as the functions in this Gold Ray Seraphim network. Thus, the ongoing War Over Timelines and exopolitic agendas are extremely heated in the Middle east areas, appearing on the surface as never-ending wars for geo-political domination. During the 10:10 transmissions and when this spiritual battle escalates as it is currently, the Family of Michael are heavily targeted to prevent them from spiritually awakening or embodying their higher aspects, which inherently reclaim the Golden Eagle Grid for its organic functioning.

This area of the Iran Gate contains assorted alien machinery which includes an Anubian Black Heart, which is designed to run 10th dimensional current in reversal and scramble organic frequencies when exposed to the earth surface. The construct is called the Reversal 55 Grid, which produces artificial or inorganic timelines that are based on the Fibonacci sequence that manifests in Metatronic Reversal. This is programmed to reverse merkaba ratios based on mathematical doubling of harmonics related to the number 5, used by Thoth Grids to hijack the human 12 strand DNA from the astral layers and thwart the progression of ascension of the earth and humanity. The transmissions for New Age hijack, such as the False Archangel Michael channeling, are broadcast from this location in order to manipulate the New Age movement to ultimately serve the NAA purposes.[4]

The way to understand this is that this planetary grid is like a conscious living entity. This Consciousness grid, the Golden Eagle Grid, is literally the projected collective consciousness and blood record of the Seraphim. The heart of the GEG is the Iran Gate or the 10th dimensional Stargate which directly impacts the functioning of our Solar Star or 10th Chakra in our personal Lightbody. Because the Solar Star is the main communication center for our Avatar Christ identity, the reversals on the planet are designed to damage this area of the planet, thus damage the individual human Lightbody from its proper functioning. This area of the Iran Gate is the Anubian Black Heart which is designed to run 10th dimensional current in reversal and scrambled frequencies. This is called reversal 10 current or Reversal 55 Grid), to block humanity from accessing their Krystal Star extra dimensional Christos family.[5]

The Family of Michael are Blue Ray descendants of the First Order Founder Ray of Melchizedeks that are the Guardians of the East through the Four Royal Stars in Taurus constellation from the star Aldebaran. They were a part of the Guardian consciousness holders of the 3-6-9-12 Arc Portal system which has been at war between the many races that want control of this access gate out of the Universal Time Matrix. We could also refer to this gate as the 11:11 Portal or Mother Arc Hubs System. Naturally the agenda was by distorting and torturing Michael consciousness, they could eventually get control of that Arc Portal System or Mother Arc Hubs. The major gate of the Golden Eagle Grid is the stronghold infiltration based upon the 10th dimensional Gate located in Iran and Iraq. The war, strife and death of many humans in this area of the planet is used to keep the dark energy circulated and in control of the Ley Lines. The NAA controller agenda of enforcing the False King of Tyranny is and always will be divide and conquer through the Victim-Victimizer mind control strategy targeting the earth population. This area is the most prominent to institute False Michael sightings and broadcast usurped channeling into the Golden Eagle Grid Network. It also has circulatory system linked to Giza at the 4D Astral Plane gate level and others.

Phoenix Grid runs east west on 4th and 7th intersection planet grid Ley Lines – so the main part is controlled in the Astral Plane Giza underground by Thothian networks and its link into Iran Gate 10D. [6]

Session Excerpt: Because what's happening apparently on planet Earth right now, the Seraphim bloodlines are the most affected right now because of their relationship to the Golden Eagle Grid and how that particular consciousness grid which is a part of the mind matrix of the Seraphim races. It's like saying they're first in line to be distorted because of this genetic connection. The drag on their genetic material, it's the number one priority to help them because they are starting to be twisted and distorted into a place of possible no return. What's going on with the Golden Eagle grid is like saying, we understand that the Golden Eagle grid and the Seraphim have been and are the Guardians of the Horizontals. The magnetic field and the Mind Control and the AI architecture used by the negatives and the regressives was to manipulate the horizontal Ley Lines because by manipulating the horizontals, they manipulate time. They are starting to be pulled down energetically from the Reversal Networks and fragment because the drag of that splitting frequency on their genetic material is so severe. See Seraphim Line Heart Healing. [7]

The APIN Networks and their characteristics uncover some of the deceptive conceptual and verbal coding in the Bible, in particular, Revelations. For example, the intent of the invader NAA was to destroy the 12D Earth portal, the heart of the Great White Lion, and thus tame the Lion, and hence: 'the Lion lies down with the lamb' (the heart being likened to the lamb and of Christ). The Golden Eagle Grid was taken over and named the White Eagle and combined with the Jehovian Grids. The 'four horsemen of the Apocalypse' refers to the technological warfare and subterfuge of reversing the currents from seven of these Earth stargate portals or energy centres during the Ascension Cycle, by means of the Crucifixion Implants or Jehovian Annunaki seals. 'Angels and trumpets' and the 'Beast' are advanced warfare technologies. The 'seven angels of the seven churches' refer to the seven crucifixion implants , and the pylons as the 'seven candlesticks which are the seven churches'. Angel is the code name for the advanced technology of the hyperdimensional cones seeded in the Earth's grid that reverse the Violet Ray current, reversal 7D current of the Planetary Logos. These writings are clearly the machinations of the fallen ETs in the NAA to create Violent Religions and war on the earth. The Phantom Matrix is a slow-acting black hole system referred to in the Bible as the 'bottomless pit', which is a realm of Hell and Hades.[8]

As Guardian Ezekiel has been resurrected from out of his Iraq gravesite and into his rightful Solar Dragon embodiment, he and his wife reunited in hierogamic union are a major keystone piece of the successful Christos Mission reclaiming the Golden Eagle Grid 10th gate. Ezekiel’s liberation restores this powerful gateway for the purpose of serving benevolent Krystic Kingship in natural law, which accelerates the crumbling of the enslavement system by clearing out the financial black magic curses and mind control sorcery oppressing angelic humanity. Thus, the financial system as it has been based on Babylonian black magic and the history of the Babylonian Empire will and must fall.

As Guardian Ezekiel is liberated and many of the authentic Solar Christ families are returning, being rescued or awakening in the planetary body, the Babylonian architecture supporting the control pillars of satanism is crumbling. Its anti-human satanic concept is being systematically destroyed in the planetary grid which announces that the rule of the anti-Christ is over. See Liberation of Ezekiel. [9]