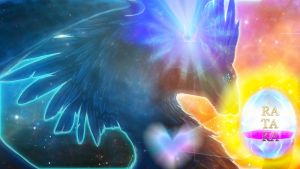 The Mother Arc of Covenant Stargate system was purposed for the transiting of an assortment of stuck or damaged consciousness bodies through the Aqua portals, in order to begin the foundations for rebuilding the KA-TA-RA Kantarian Dragon ring portal system.

Our Universe was invaded when the 8D layers of the Metagalactic Core were attacked by black hole entities that are a fallen species that hybridized with advanced AI technological systems, many of whom joined together later on to form the NAA. Obviously, given Ezekiel’s placement as a Christos Solar Rod principle in the Universal architecture as an Amethyst Order Dragon King along with his Gaian Kantarian spiritual family identity, he fell along with the rest of angelic humanity with his consciousness body parts strewn across many dimensions.

Ezekiel’s individual identity had access to his Amethyst Order Holy Father Kantarian solar dragon body memories from Gaia. Ezekiel’s Amethyst Order Father of Dragons Kantarian body became embedded in the Earth as the result of the Electric Wars and Fall of the Gaian Matrix, in which the advanced AI beast machinery from the black hole system had infected the 8D Galactic Core.

My first important introduction to the magnificent Emerald Order-Amethyst Order Founder Cosmic Christos Solar Dragon King Ezekiel, an ancient Kantarian Father of Dragons from the Solar Dragon Ouroboros Lines on Gaia, and known as the Prophet Ezekiel during his planet Earth re-incarnation.

Recently we learned that Amethyst Order Father Ezekiel had an entire spiritual family that was originally under his guardianship upon Gaia, and when he fell, so did his female counterpart and entire Kantarian Solar Dragon family that became impaled on the horizontal grids of the planetary body in the lowest dimensions possible. They were condemned to the amnesiac blank slating and the indigo-violet ray inversions which removed their wings, the same fate that we all have endured from being reincarnated and recycled on the Earth plane during the ongoing war against angelic humanity. [1]

A portal called the Halls of Amoraea was constructed between the earth core and Sirius B in which sections of the Amenti was placed in order to orchestrate the second seeding and create the hybrid line between Sirian-human consciousness, which was known as the Kantarians. The Kantarians helped to serve as Guardians and mentors for the human race and they were heavily involved in educating the Egyptian and Sumerian cultures. During the Egyptian dynastic period this portal bridge was known as the Third Eye of Horus, which represented the union between the mystical teachings of the Left Eye and Right Eye of Horus. During the last stages of the Atlantian Cataclysm, as the result of the explosions damaging the Planetary Grid Network, this portal bridge was damaged and could not be repaired due to the Giza Stargate takeover. [2]

The Thousand Years War was significant in the damage of the 6D Stargate and its related portal systems, including the destruction of the direct 6D passage to Sirius B. This passage was called the Halls of Amoraea, this passage was especially important for the Elohim Blue Ray Mother Sophianic lineages, Michael-Mary sacred union process of Building Wings and for supporting the activation of the Permanent Seed Atom in the human lightbody. During phases of early Egyptian civilization, this 3D passage link to 6D Sirius B was an initiation rite for the Blue Flame Melchizedeks third eye opening, thus it was called the Third Eye of Horus (RA).

This particular passageway linked the lower dimensional timelines of the planetary matrix with the higher Harmonic Universe timelines existing in the Sirian constellation via Sirius B. At that time the Sirian constellation included a tri-matrix that was acting as the repository for some of the Founder Records through another area referred to as the Hall of Records, these included Diamond Sun records that were being studied and protected in Sirius B by Christos Guardians. Blue Ray Indigo lineages were assigned to help repair this 6D passage through embodying 6D Indigo frequencies with activated 6D DNA imprints, and this damage was finally repaired through the Mother Arc Gates. However there remains holocaust histories and miasmatic imprints to clear from this timeline connected to the hybrid memories humanity has enmeshed with the Annunaki Hybrid Fallen Angelics and fallen Elohim genetics.[3]

It was made clear over time that Ezekiel and the Family of Ezekiel gestalt, which extended into his Kantarian Dragon lineages on Gaia, were important keys in the embodiment principle of the masculine Solar Rod Template throughout the planetary grid networks spanning into all three harmonic universes. The three toned unified signatures of the planetary logos grid architecture were held throughout the dragon lines as they spanned around the Earth, Tara and Gaia in the electro-tonal patterns KA-TA-RA.

KA-TA-RA sun-stars are unified tri-wave embodiments by Kantarian Solar Ouroboros Dragons that seem to be connected to the original emanation of Founder Amethyst Dragon King Ezekiel and his father-son triple solar masculine Christos consciousness body sourcing from the Rha God World Creation. The Kantarians are embodied as Solar Dragons with wings that held open the rotational core in the portal systems that link directly into the crystal diamond hearts within the center point of union and that central point is the Azura, which exists within each 12 Tree manifestation grid. Their function was linking these rotational core portal systems all the way back into the Azura Point of the Emerald Crystal Heart circuitry of the Kryst-Krystallah matrix in the God Worlds. The Kantarians are the center point of union principle in the Galactic Core that are designated to embody the structure for the Mother Arc and Father Arc portal systems that lead all the way in and out of the nested holographic time matrices. The Kantarians unify in male-female Aeonic Pairings that step down the flows of the most sacred holy spirits of the Krystallah aquamarine flame source coming from the pure love transmissions of the Cosmic Emerald Crystal Hearts of God.[4]

When the Rosslyn Chapel 6D portal and Chartres Cathedral 7D portal unified an activation of the holographic Emerald Founder Records occurred when an Azura Point for the Cosmic Emerald Crystal Heart birthed into the Spine of Albion and aligned with the Solar Rod of Ezekiel, making corrections to the positions held within the Cosmic Clock of the Aeons. The Spine of Albion wing activation opened into the Kantarian Dragon portal system from within the Azura portal, opening into 8D and beyond, further igniting the solar ouroboros lines of Maji Grail Kings throughout Earth, Tara and Gaia. This grid activation in the Albion began an opalescent krystal river flowing golden white fire plasma platonic solids for re-encrypting the planetary elementals and supporting corrections to the planetary rod horizontal Ley Lines to purge AI machinery.[5]